Dedication is rushing to NYC to attend Samsung’s 830 Series SSD Release Party only to hop back in your car, drive 8 hours and whip up an early morning article.  To say I am a bit overwhelmed is an understatement but with the number of previous e-mails asking about Samsung 830 pricing, I couldn’t resist.

Read on as you will definitely be surprised on how Samsung plans on hooking the consumer with the SSD 830. 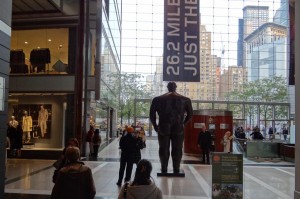 In grand fashion, Samsung held their official release party for the Series 830 last night at Samsung Experience in the Time Warner Center of NYC.  For those who have never been there, the security guards all come across on entry through the front doors can’t be missed. (Click on the piks!)

Samsung Experience is located on the third floor and, for tech lovers, this is a must see when visiting NYC!

We knew, for instance, that this would be a complete migration kit and also contain the newly revamped SSD Magician but didn’t expect each and every package to contain a FULL retail version of Norton Ghost.  We also never expected Samsung to team up with Warner Brothers for a complimentary full copy of their new game, Batman – Arkham City.  It is true though and the game will be bundled in with all capacity packages 128GB and above.

The official release was made by Samsung’s own Senior Vice-President of Mobile Entertainment Reid Sullivan who was quickly overshadowed by the Caped Crusader himself.  As seen here, our Associate Editor couldn’t resist the opportunity for a later photo op with Batman who easily stood 6’5″ and fit the part to a tee. This guy was big!

At the end of the day, fun was had by all and here we see Karen in the official Conan O’Brien walking and talking’ couch.  Yours truly was even caught on camera while in discussions with visiting Samsung Exec’s.

So… was the 8 hour trip to NYC simply for the Samsung release and a rushed trip back to sit here at 5am and write this worth it?  ABSOLUTELY!!!!