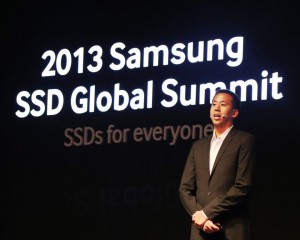 Introducing Samsung’s new ‘RAPID Mode’ technology at the 2013 Samsung SSD Global Summit this past week was David Lin, former VP Product Management of NVELO, NVELO (and David) now a part of the Samsung family after NVELO was purchased just a few months back.

We have been curious as to what plans Samsung had with the former NVELO as their Dataplex product was, at one time, probably one of the most promising HDD caching solution on the market.

It was definitely the only solution available that could transform HDD speeds into that of an SSD and we had done extensive testing that validated this software with any number of SSDs.  Dataplex not only increased your systems start times to about 15 seconds from an average minute plus for most people, but also, it could boost hard drive performance to above 500MB/s in SATA 3 capable systems.

RAPID is a new feature that will be included with Samsung Magician Ver. 4.2 and can be easily installed through Samsung Magician to significantly improve the performance of your PC.  Its initial release will only be compatible with the new 840 EVO, however, Samsung expects a follow up release to be compatible with the 840 Pro soon enough.  RAPID Mode is storage management software that is in place between the systems OS and SSD and provides read acceleration and write optimization for a system level performance boost.  RAPID Mode is compatible with Windows 7/8 systems and will use up to 1GB of your system memory as a cache where it stores frequently accessed data for lightning fast retrieval on demand.

Taking a look at this Samsung Magician comparison, we can see that read performance has increased to over 1GB/s while write performance has jumped 260MB/s which is no small feat.  It will be very interesting to get some first hand testing in to see how this feels in real time use, especially since the Samsung quote is ‘system level performance boost’.

Last but not least, Samsung displayed PCMark Vantage results that showed a very significant jump in performance on both the 250 and 500GB 840 EVO SSD.  Considering Vantage testing is based on eight real life user scenarios, this leads us to believe that the Samsung RAPID Mode increase will not be limited to just synthetic benchmarks alone and that we just may see a visible difference in system performance.

Stay tuned as our review of the 840 EVO will be up soon enough as well as some great testing with the same SSD in RAPID mode.  Wouldn’t it be great to stretch theat 1GB memory restriction just a bit to see how high we can push our more demanding test scenarios?