Normally, when we work with SSD manufacturers, the class of product is pretty straight forward.  Whether it be enterprise, consumer or enthusiast, we normally have an easy time pinning down the the point of the product.  With Samsung, you might need a degree in marketing to figure out what is going on.  This has been a point of contention in the past because products were not only differentiated by product type, but also distribution model.  At the 2014 Samsung SSD Summit, we got a much clearer picture.

With the release of the 845DC EVO, Samsung released a product in their Datacenter family that would be available in the channel and through distribution.  In layman’s terms, you, as an individual or small business owner have a chance of buying one.  On the other side of the aisle, you have the enterprise family of SSDs (reviewed in the past), which you will only see if you are a very large OEM customer. 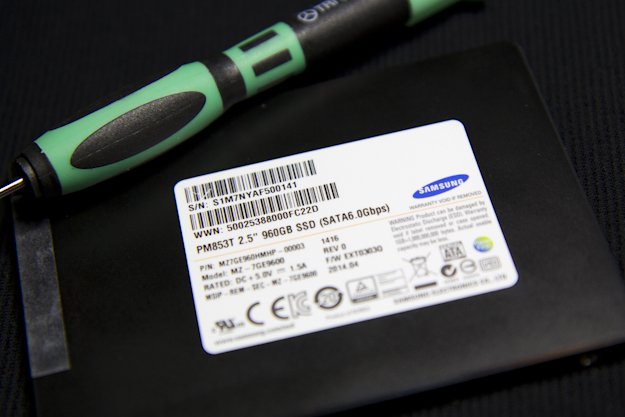 That brings us to the Samsung PM853T, which is a part of the enterprise family and a follow-up to the SM843 that we reviewed last year.  The 853T is an almost identical clone of the 845DC EVO.  The two share most of the same specifications along with the same TLC NAND.

Just like the 845DC EVO, the PM853T is focused on read performance.  Both random and sequential reads are about as high as you will see on a SATA-based SSD.  Write performance is also solid for a product in this class.  There are a few minor differences between the two SSDs based primarily on firmware implementation.  The PM853T draws slightly less power (3.4 v 3.8W), has slightly better write IOPS (15K v 14K) and a higher ambient temperature specification (70 v 60C).  All of these things will make it more suitable for enterprise/server use-cases.  Unfortunately, they cause of the PM853T to have a lower MTBF (1.5 v 2.0Mhr) and a reduced warranty (3 v 5yr).

We don’t have any final numbers in terms of pricing, but you should expect the same general area as the 845DC EVO (~$1/GB).  Although, we did see this model being resold on a few reputable online warehouses for as low as $0.72/GB, but that was after a heavy discount, so it is impossible to tell if that is a price you will see going forward.

We just want to reiterate that the PM853T and 845DC EVO are identical, hardware-wise, in every meaningful way.  We didn’t inspect every discrete component, but the layout looks exactly the same.

The NAND packages, labeled K90KGY8SP7M-CCK0, are identical to the NAND that was used on the 840 EVO and 845DC EVO.  This 19nm Toggle 3bit MLC NAND, in part, allows for the high density that we see in this line.

The cache is a single 1GB Samsung DRAM package, which is typical for SSDs of this capacity.

The driving force behind the Samsung 845DC EVO is their MEX 3-Core ARM Cortex-R4 (400Mhz) controller which is 33% faster than its predecessor found on the SM843.  This newest controller should also deliver better performance and consistency.

Just like the 845DC EVO, the PM853T has an array of tantalum capacitors that provide protection against data loss when power is interrupted.