As much as the common theme with SSD manufacturers has been to ‘wait for the Flash Memory Summit’ at Computex 2015 this year, Phison seems to be ready to make serious position play in the SSD space, displaying a number of SSD designs at their suite.  First and foremost, we were more than happy to see two NVMe SSDs based on the Phison PS5000 SSD controller. 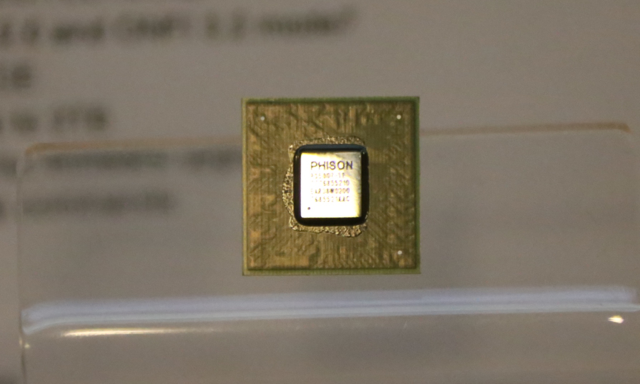 This controller is based on the HPM 28nm TSMC process, supports PCIe 1, 2 or 3, NVMe 1.1, and they have qualified it to support the latest A19/15nm/MLC/TLC/Toggle memory designs to a maximum of 2TB in capacity.

This was also shown in a M.2 2280 (80mm) configuration where the maximum capacity capable would be 512GB.

A video depicting this SSDs performance capabilities identified it as being capable of above 2.5GB/s read and 1.2GB/s write throughput with over 300K IOPS, however, actual operation was not observed with this display:

Also on display was the PS5007 controller within a PCIe 2.5″ notebook form factor SSD, the devices connector being the SFF-8639. This SSD has listed performance of up to 2.5GB/s read and 1.2GB/s write throughput.

Being an enterprise solution, the power capacitors were more than prevalent on this SSD:

As well, we also saw the PS5007-E7 in a HHHL card format where specs are similar to that listed above:

It should also be noted that Phison is not a direct retail seller and provides their design to other SSD manufacturers for their sales, this specific SSD being considered presently as an enterprise resource, however, we will no doubt see this leaked to retail sales soon enough.