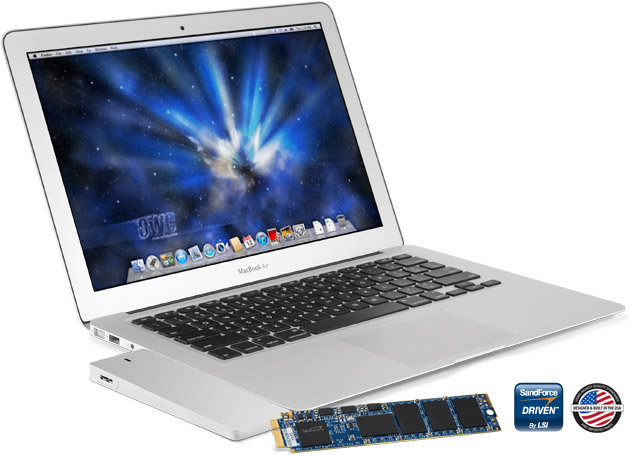 By combining proven SandForce technology and Tier 1/Grade A NAND, Mercury Aura Pro Express SSDs exceed the factory SSDs in both speed and capacity.  These new SSDs are available in both 3GB/sec versions for the 2010 MacBook Air models, and in 6 GB/sec versions for the 2011 MacBook Air models. Each version is available in up to 480GB capacities for up to 8x the storage capacity of the original factory SSDs.

What make this product really unique is re-tasking the original factory SSD as a new external drive!  After watching the free OWC video on how to install the Mercury Aura Pro Express in 15 minutes, MacBook Air owners are then instructed on how to re-task the factory SSD as a high-performance external drive using the Mercury Aura Envoy enclosure.   The Envoy is the industry’s only bus-powered (no AC adapter required)  external drive that is designed specifically for the MacBook Air.  The Envoy features a tapered, 1.5 ounce aluminum housing that nicely complements the MacBook Air’s unique shape.  The Envoy utilizes a USB 3.0 interface to achieve real-world data rates of over 200 MB/sec with the original MacBook Air SSD — great for high-speed, portable backup and file storage; not to mention on-the-go enjoyment of videos, movies, or music.

There are seven bundles available starting at $199.99 MSRP:

The Mercury Aura Envoy is also available to purchase separately for an MSRP of $47.99 as a 0GB enclosure only, for other external application requirements that would benefit from external accessibility to Apple’s 2010 and 2011 MBA SSD modules.  A version for the 2012 MacBook Air models is planned for future release.

According to Larry O’Connor, Founder and CEO of Other World Computing, “The Mercury Aura Bundle continues our streak of first-to-market with performance upgrades for the MacBook Air. This potent, two-upgrades-in-one “dream team” solution truly takes 2010 and 2011 MacBook Air machines to new levels of performance, convenience, and flexibility.”

The complete press release is available here; while the product page can be viewed here.