How they keep doing it we’ll never know but VR-Zone has scooped the new Intel SSD Roadmap before the ink even got a chance to dry.

A quick look sure depicts an entirely different picture than most had less than a year ago when many believed Intel to be folding their proverbial SSD shop for other interests.  Who would have known?

What we do know from the Intel  Roadmap is that they have absolutely no intentions of letting things pass them by in either the enterprise or consumer SSD marketplace.  As the world awaits the enthusiast release of the ‘Cherryville’ successor to the Intel 510 Series, we can’t help but once again wonder about the familiar SandForce capacities that have been so obvious on every manufacturers ‘SandForce Driven’ SSDs since day one.  If this Cherryville release IS NOT a Intel release, I will eat my words! 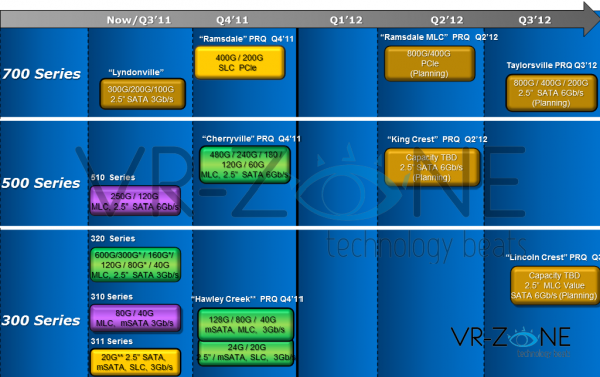 The ‘Hawley Creek’ mSATA SSDs all but had to be expected and little is being said of the PCIe ‘Ramsdale’ but its sure to give OCZ a run for their money.  Looking ahead, we see the ‘Taylorsville’ which is set to succeed the newly released 710 with both superior performance and capacity as well as the ‘Lincoln Crest’ which is believed to build upon the present Intel 320 Series.

Although the Intel ‘SandForce Driven’ theory is PURE speculation based on things that just fall into place logically to include performance and capacity, Intels desire to provide both consumers and enterprise with larger capacities is not.  Now, if we can see them cut the prices on those capacities just a bit, they may grab a foothold on the consumer SSD sector once again.

Oh and our sole reasons for belief that the 520 will be an Intel release: