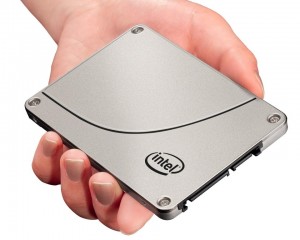 It has been a few years in the making Intel is finally putting their name on a SATA III solid state drive controller this morning.

Its a direct successor to the SATA II 710 “Lyndonville” series, but sports two times the read performance, a 40% lower price tag, and an astounding 15 times better write performance. Like the SATA II-based 710 before it, the S3700 uses Intel’s mature 25nm HET MLC flash for endurance , approaching that of single level cell NAND. Unlike the 710 however, the controller isn’t just a warmed over version of past 10 channel ASICs, it’s a completely new 8 channel design sporting some impressive features.

Intel is keen to point out the steady latency characteristics, improving quality of service for enterprise applications. 99.9% percentile latency is specified as approximately 500 microseconds; an impressive number to be sure since average latency will be far less. As a result, random performance remains consistent from one moment to the next, keeping storage intensive applications fed without delay.

In addition to power-loss-protection and 256 bit AES encryption, the S3700 has end-to-end data protection through the use of CRC (cyclic redundancy checking). That means data corruption is practically impossible from the host, throughout the drive, and back to the host again.

Cost is another impressive feature as the S3700 amounts to a 40% reduction in price over Lyndonville. This is probably related to the amount of flash on the drive. Tthe 710 had tons of extra flash whereas the new S3700 is far more traditional in that Intel claims it’s only 20% over provisioned, not the ~50% figure of the older SATA II drive. That makes the price per GB of usable capacity much lower since the bill of materials is far less. Pricing has been announced, and the MSRP works out to around $2.35 per GB. That’s far less than many eMLC based drives, and isn’t a whole lot more than the Intel 320 series is at the moment (actually, its less expensive per GB than the 40GB 320). Despite using less flash, the S3700 is capable of 10 random drive writes per day. That works out to 14.8 Petabytes of endurance for the 800GB model over the five year warranty period.

Will we ever see this new 8 channel design inside future client products? Many long time Intel fans have been hoping for a 6gbps proprietary controller, giving consumers the choice of a competitive all-Intel SSD once again. There isn’t anything preventing it from being used in a next gen 320-like product, but it really boils down to priorities, and right now, it probably isn’t a priority. With that said, lots of savvy storage enthusiasts would line up around the block for a chance to get a mainstream client product based around the S3700 controller, us included.

We’ll know more when we finally get review samples in-house, these on route as we speak, and we can’t wait to see what Intel’s new controller is capable of. After all, it was Intel that really invented the modern high performance SSD blueprint. While other entrants into the market eventually achieved performance parity, it was Intel’s signature 10 channel controller’s prioritized random performance that made their first two generation drives such finely balanced products.

Keep an eye out for our review of the Intel DC S710 (or a few of them) in the very near future!