According to Satoshi Miki, CEO and Co-Founder of Fixstars Corporation, “The SSD-3000M/1000M were released in Japan last November, and have been getting great feedbacks from our customers. As an innovator of storage solutions, we are focused on providing high performance and reliability SSD solutions, to accelerate our customer’s business.” 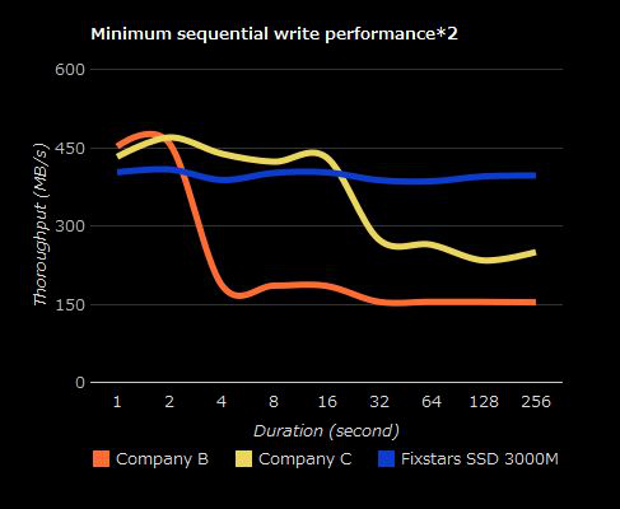 Fixstars’ new offerings feature 19nm MLC NAND and a SATA 6Gb/s interface. These are encased in a 100mm x 70mm x 9.5mm enclosure with a total weight of under 115g. Sequential read speeds are stated as (up to) 520 MB/s in both standard and boost modes. Sequential write speeds are stated as (up to) 350MB/s in standard mode, and increase to (up to) 500MB/s in boost mode. The TRIM function is supported with operating systems that also support it, as well as garbage collection and S.M.A.R.T. drive health and performance reporting attributes. Power consumption at idle is stated as less than 3W. Active power consumption is stated as less than 5W in standard mode, and less than 6.2W in boost mode. The SSD-1000M and SSD-3000M are backed by a one-year limited warranty. 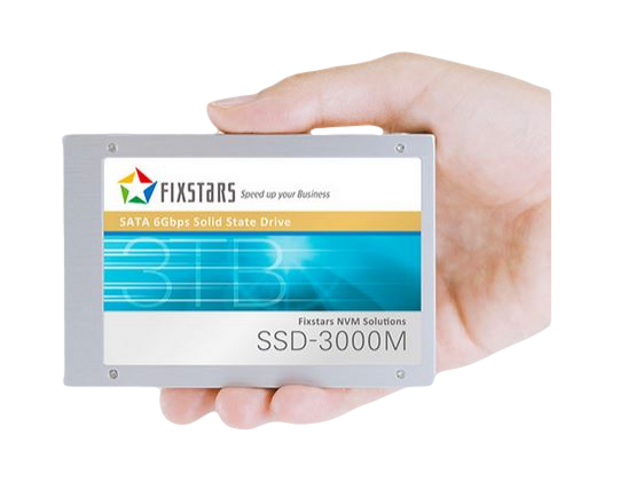 The SSD-1000M and SSD-3000M are available now for order on the Fixstars website. According to the listed specifications chart, they are also planning a 5TB SSD-5000M, to be available later in Q1 of 2015. You can visit the SSD-1000M/SSD-3000M product page here; and you can view the Fixstars press release announcing these new drives in its entirety here.

It wasn’t. Sandisk beat them with their optimus max line (maxxing at 4TB) a full 6 month earlier.

Article should have said world’s highest capacity SATA 6Gb/s SSD. The Optimus Max line are SAS drives. Article has been amended to reflect this.
Thanks, Benjamin!

The terabyte drive is $990 (on their site). That’s pretty pricey. Anything that makes it worth that premium over other 1 TB drives?

Any idea what the 3 TB is priced at?

That stuff is enterprise grade, so its bound to carry a pricepremium compared to typical consumer drives.

sorry, what’s SO enterprise grade here ? ONE YEAR LIMITED warranty ? You plan your business to crash pretty soon, do you ? Sub-par performance ? 19nm litography ? Pche. Don’t want to know the endurance, no matter what clever tricks they try to apply, the amount of re-writes to cells is limited. Point. Sammy 850Pro and 845DC Pro will run circles around this. 5yr/10yr warranties, 10 DWPD = 14600TB written for 845DC Pro version, I will bet my ass that it will survive 10 times as much. Why ? Techreport.com report. Consumer 840Pro rated at few dozens of TB… Read more »

>sorry, what’s SO enterprise grade here ? ONE YEAR LIMITED warranty ?
You plan your business to crash pretty soon, do you ? Sub-par
performance ?

> the amount of re-writes to cells
is limited. Point.

So is with any flash device out there.

>I don’t see single thing that would drive me to buy these Japanese things. Yeah, the density is phenomenal

Looks, a very good reason right there. High data density can be crucial sometimes. Why have 4 drives, if you can only have 1 ?

Obviously, you’re not the target group for this drive. That doesnt make it bad.

>> >sorry, what’s SO enterprise grade here ? >> Controller, highly binned nand, firmware… yeah, controller they buy from somebody else and have absolutely no control whatsover. They can’t say anything to development. They can’t say anything at all. I really doubt they have firmware team and heavy-duty custom firmware – Intel has been manipulating SandForce stuff, we know that. Have you seen Intel’s SSD torture procedures (anandtech) ? I somehow doubt FixMeQuick is as capable, don’t know why but I really feel that way. If I create a SSD and want to achieve “consistency”, I would just make it… Read more »

>Whatever the situation is, 19nm binned will never be as reliable as 40nm 3D closed-eyes-non-binning.

You obviously never heard of e-MLC before, hadn’t you ?

Also, all that ranting for a drive, which was just announced ?
Are you sure, you don’t work for some other competitor ? 🙂

sure I don’t work in any manufacturing or SSD/flash industry. I’m just a pure customer trying to choose the best for him. Tell me any single thing I got wrong please.

Totally incomplete data. We can’t call that a specification, I say. We’ll see. What is definitely clear is 1yr LIMITED warranty. End of the game for 99.9% REAL enterprises out there.

I also highly doubt enterprise is ready to just move to 3D. Although its a better tech on paper, its still pretty much unproven in the field and nobody knows, what will come out if it. Thats why using tested 2D flash (remember 19nm flash is pretty old and tested nowdays) make sense, especially if you dont own a nand fab.

nothing wrong with e-mlc generally, that was related to “16nm e-MLC”. 16nm nothing SSD in my house or corporation 🙂 850Pro and 6k : that’s just calculation Anandtech has come up with based on SMART statistics – nothing else, nothing more. This doesn’t mean it can’t survive 50.000 P/E. We can’t judge by 850Pro (consumer class) what 3D is capable of. Remember this is 40nm, that’s unbelievably HUGE compared to anything we can meet today. Back to real life : Samsung will never specify 100.000 P/E for 850Pro even if it is able to achieve it. That model doesn’t have… Read more »

Nobody is denying 3D isn’t good (endurance is surely better than 2D nand). But 2D has some life in it. It may be inferior in endurance, but thats not the whole story to the whole reliability. On paper, 3D might sound better in every way, but that still doesnt make it better suitable for enterprise to just jump on the bandwagon. Given how 3D is still an immature tech, there are plety of things that need to be sorted out for maximum reliability; like tested firmware, proper controllers…. I’m sure this SSD will find its way to certain nieches, where… Read more »

Also bear in mind that such prices on their website are “single lot” prices. If a datacenter, say, was purchasing multiple drives they would be priced differently based on purchasing a larger quantity.

Wow, thats pretty much the worst way you can do an ssd.

Slow emmc chips and an a damn FPGA on a ENTERPRISE PRODUCT ???

Now i get it, @disqus_T33SOCFBTe:disqus

Did you read the linked article?
Merely to at least just deny there is no fairness.
This product, and to have been equipped with a lot of eMMC chip than the actual capacity, FPGA is used to integrate the management.
And, it is also easy to customize in response to customer demand.

Its still an FPGA. You used that to prototype or manufacture at small scale, not a finished product, where reliability is key. For 3TB or more, it would make more sense to just use two phison s10 controllers (this seems to be one of the first 3rd party controllers to support more than 1TB) and raid0 them. This would reduce complexity, since you dont need a big fpga to control everything but you just slap two of those controllers connected with a decent raid0 controller. And since you can get 128GB packages nowdays, you would only need 24 of them… Read more »

Ok. And that you have not read the article, you is I know that do not understand this product.

yeah, i have a hard time understanding brokem english, that comes from google translate.

It is certainly troublesome, but browsing of information should be. It has been almost written in such a feeling. I.The SSD of easily customizable new structure the speed and capacity II.First, put the target for video devices, and medical devices,etc. III.Was disassembled the Fixstars SSD-3000M. It will be 52 pieces equipped with eMMC chip of 64G bytes IV. eMMC is equipped with a controller to manage the flash memory to itself. And SSD controller is not required. Instead, read and write eMMC data using a FPGA, which exchanges with the external interface. V.This has two advantages. One is that the… Read more »

>I.The SSD of easily customizable new structure the speed and capacity So is asic based solition. You make a base configuration and fuse off features that are not needed. You dont need fpga for that >II.First, put the target for video devices, and medical devices,etc. I wouldnt put fpga based device with 52 independed emmc controllers in a medical device. Or any envirment, that needs high reliability. Remember, the more controllers you have, the bigger the risk of faulire (think of it as raid0). >III.Was disassembled the Fixstars SSD-3000M. It will be 52 pieces equipped with eMMC chip of 64G… Read more »

Even if you complain to me, I can not even how to.
Simply, the features of this product is so.

Also, this reminds me of another similar solution using the sledgehammer emmc approach (only sataII though)