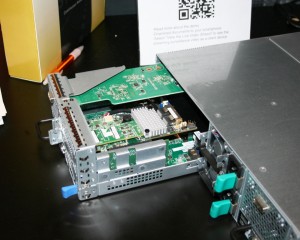 At AIS 2012, LSI announced a new high-availability platform dubbed Syncro. Along with the MegaRAID family and the recently-released application acceleration platform called Nytro, Syncro is all about high availability.

While Syncro is a both a concept and a platform, there are actual units being demonstrated. The first two products, Syncro MX and Syncro CS do have different niches to fill, however.

Syncro CS is a two board, half-height half-length based offering. Each of the two boards goes in a server, and then connects to one pool of direct attached storage. The resulting shared DAS is able to handle failures almost instantaneously, keeping the storage available for during failure events or even scheduled maintenance on one server. Primarily intended for smaller businesses which would otherwise be unable to afford higher availability systems, the CS is positioned for the smaller operation facing a dearth of HA options.

The CS is still basically the same LSI RoCs being used in MegaRAID products, but with special Syncro ingredients sprinkled on top. Because of that, setup and maintenance are no more difficult than setting up a RAID array with LSIs MegaRAID Storage Manager. Thats important, since smaller shops are less likely to have the expertise to manage complicated modern HA systems.

The arguably more interesting product bears the MX name, and its not really for small outfits. Instead, the Syncro MX is a boot appliance for large data centers. As it turns out, some of the most expensive racks of servers in the world boot off the cheapest notebook SATA HDDs. The reasoning is that once the system boots, all the boot drive does is write the occasional log data, meaning almost anything will do. So what happens when said drive kicks the bucket?

Replacing one drive might only take a few minutes, but if there are hundreds of thousands of servers on site, replacing boot drives becomes a full time job, the cost of the drives add up, and downtime is the result. The MX is a rack mount boot appliance which uses LSIs technology to split one mirrored array into 24 or 48 separate boot volumes (for either 24 or 48 servers housed in one rack). Each system connects to the appliance through eSATA, meaning that the virtual boot drive slice  from the MX is seen as local storage by the server. LSI claims that for every 100,000 such servers, 100 boot drives die per week on average (or 5,200 per 100K servers per year). Over three years, 15% of such drives will fail. LSI is banking on the fact that large datacenters, like everyone else, will want better TCO that such an appliance can offer.

The MX we saw was using mirrored Seagate Constellation 1TB HDDs. In a 24 system configuration, each server would get 40GB of that (presumably, a 48 server model would pair up twice the drives). With such a setup, there are tons of possibilities that using a single, local drive cant give you.

Check out LSI’s press release on the next page.