Our report today will be an exclusive pre-release review of the upcoming Super Talent RAIDDrive upStream PCIe SSD.

Although release dates and prices of the upStream have yet to be announced, it might be a safe bet that the upStream will be the second PCIe SSD to reach consumer hands , although it will also be configurable to enterprise need as well. Expected value, performance and ease of installation are three characteristics that might make this new PCIe SSD entry a success.

I find it a bit surprising that, to date, the only available consumer targeted PCIe SSD is the OCZ Revo family, especially with the flooding of SSDs (and SSD manufacturers) that has occurred. I dont think that anyone who follows such technology can deny that SSDs have hit the scene faster and stronger than any other computer peripheral, at least in the last four years.  It also goes without saying that SSDs are easily the most visible upgrade one can do to improve their computer system, trumping even that of the CPU, RAM and graphics cards. 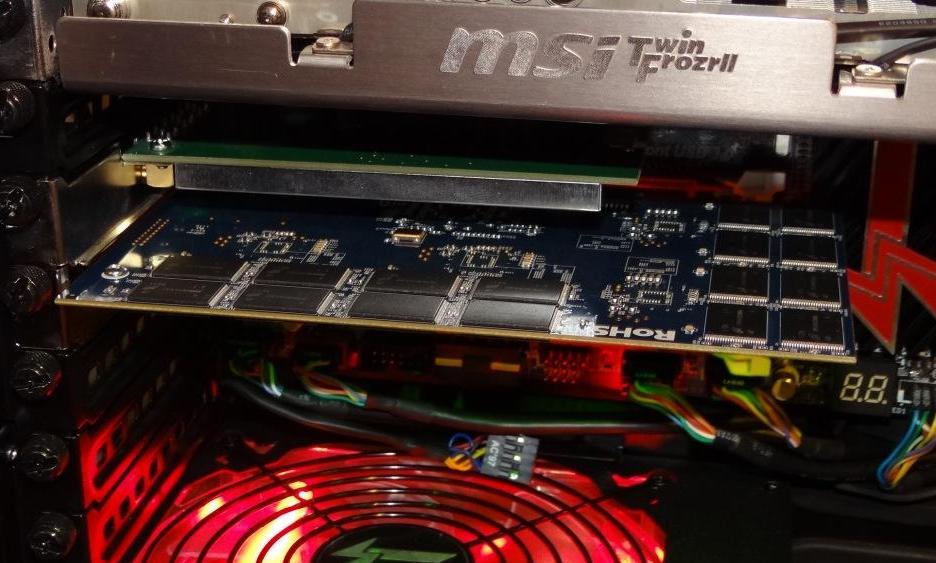 Super Talent is about to unveil a new addition to their SSD line that will be known as the RAIDDrive upStream and, although many might be waiting for us to run a Revo/upStream comparison, each of these drives literally stands in a class of their own, especially when considering the components of each card and their installation into a typical system. Although we cannot speak of the price point, we think that Super Talent has wisely addressed three key consumer needs for any PCIe SSD today, these being expected value, performance and ease of installation.

The Super Talent RAIDDrive upStream is expected to be available in capacities of 220, 460 and 960GB and will typically contain mlc flash although slc configurations can be ordered for more intense enterprise needs. Installation requires a PCIe x8 lane and performance is listed at 1GB/s read and 900MB/s write.  As it’s form factor enables this card to be installed in any 1U, 2U or 3U rack mount storage server with riser card, potential target applications might include audio/video streaming server cache storage, data center server cache storage, web server cache storage, supercomputing’ near-line backup and security systems.

Before getting into the upStreams components, we are going to apologize for the quality of some of our pictures as this SSD is not the typical new review sample that one might receive via courier. In fact, myself and Peter Carcione ripped this out of their sample system on the last day of CeBIT 2012 in Hannover, Germany, and it has seen a great deal of use prior. Come to think of it, this thought might provide additional credit to performance of the upStream once we lay out some of our benchmark results.