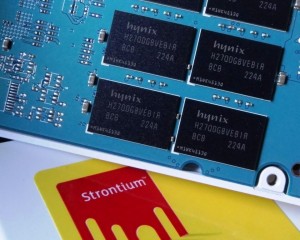 Earlier this year, SK Hynix announced that they would be manufacturing their own consumer SSDs and followed that with the purchase of Link A Media Devices and their LM8700 controller, a controller which has already proving itself to be one of the top in the industry.

Today, we are going to bring you an exclusive review of the fruit of SK Hynix’ labors, the Strontium Hawk Series 120GB SSD and, as surprising as it may seem, this SSD is LSI SandForce Driven through and through.

The production of a non-LAMD based SSD for Hynix is actually not that shocking as an exclusive contract between Corsair and LAMD was in place long before the Hynix purchase.  The length of this contract is not known, however, it accounts for probably one of the smartest moves made by Corsair to date.  The performance of their newly released LAMD controlled Neutron Series has taken the industry by storm and can be seen in our recent review of both the Neutron and Neutron GTX.

Strontium is marketing Hynix’s new release under their branding and full credit is due with respect to their transparency of such in website literature.  Add to this the fact that the new Hawk Series is LSI SandForce based and, even without the LAMD controller, we still have one of the industries top Flash Storage processors (FSP’s) at the heart of this drive.  Take this a step further with the potential low pricing model available with SK Hynix memory and this partnership will have proven itself to be a great move for both Strontium and SK Hynix.

The Strontium Hawk is available in capacities of 120 and 240GB and can be purchased through their website at prices of $170 and $100, respectively.   This would make this the lowest release price we have seen to date for an SSD utilizing both synchronous NAND flash memory and the LSI SandForce SF-2281 FSP. Actually, this may be one of the lowest release prices we have seen to date for any SSD, come to think about it.  If you think this is a fly-by-night organization think again.  Strontium distributes 500,000 memory modules and 1.2 million flash products worldwide EVERY MONTH and has a strong marketing presence in over 30 countries, including the USA and Canada.

The Strontium Hawk speaks to performance of 510MB/s read and 470MB/s write with 38,000 write IOPS and, given our past reviews of the SF-2281 FSP, we know these specifications are very conservative as this processor typically shows much higher performance.  It is a SATA 3 SSD, fully compatible in SATA 2 systems, has full TRIM support, and something we didn’t expect to see was the Mac branding and ‘compatible with Mac’ on both sides of the exterior casing. Even in the specifications, it states ‘Highly Compatible With MBP Series’.

The amusing thing about this Mac support is that pretty much any SSD would have the same compatibility here, however, the decision to actually place this on the packaging could reap great benefits.  We couldn’t count the number of times we have been asked if such and such an SSD would work in a Mac, or, what would we recommend as an SSD for the Mac environment.  The Strontium Hawk also comes with a standard three year warranty.

The Strontium Hawk is encased in a unique white aluminum casing with two corners curved so the SSD actually has the appearance of a book shape. It is the EXACT casing displayed by SK Hynix in their release and contains Strontium branding on the front.

Four screws can be removed on the bottom of the SSD to reveal a PCB that contains the SF-2281 processor on one side with eight modules of Hynix synchronous 25nm NAND flash memory on the other. Clicking on any of our pictures will bring up a high resolution image for better viewing.

Although total capacity of this drive is technically 128GB, SandForce firmware needs, over provisioning and formatting of the drive leave the end user with an available capacity of 112GB.