Our review of the SPYRUS WorkSafe Pro Windows To Go Secure Flash Drive marks the world’s first independent report of the SPYRUS encrypted flash drive, a flash drive that would most definitely suit the likes of James Bond.  It brings to end a period of over two years of discussions and final agreement on exactly what could (or could not be) shown and discussed with respect to this drive. As much as our report of the SPYRUS cannot zone in on such things as component closeups, hardware specifics, or even some of the information that might normally be discussed in such a hardware build, we trust you will be as amazed as we were at what is easily the worlds most advanced and secure flash drive. 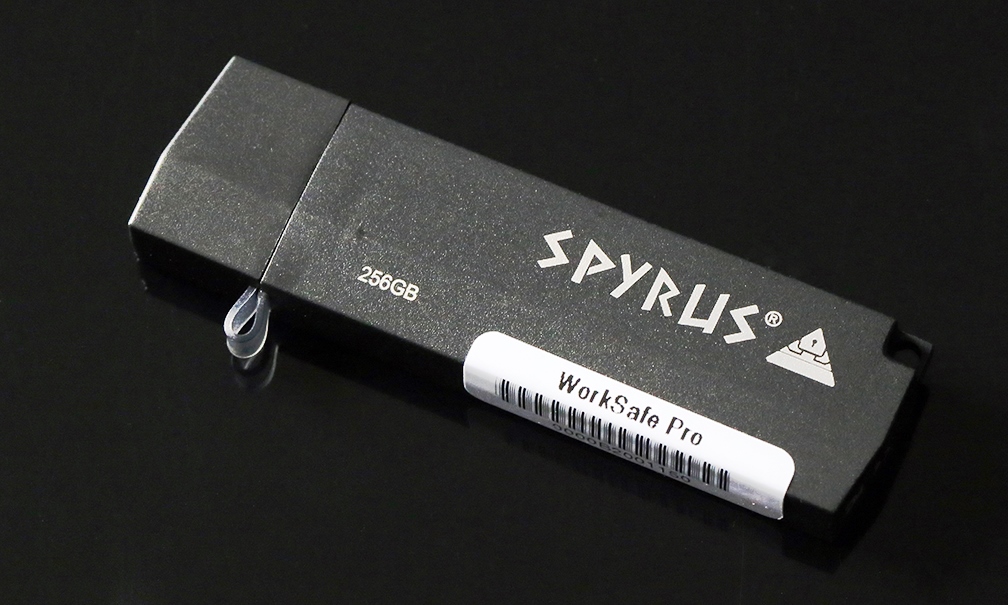 Our specific interest with SPYRUS became evident a number of years ago when we started exploring the future of fully bootable flash drives and what advance they might be capable of.  Fast forward to this report and, not only does it boot into its own Windows 8.1 environment from any Windows system, but also, it boots into Mac systems with just as much ease, displaying a fully capable Windows To Go desktop within a few seconds of starting our MBA.  Better yet, the SPYRUS flash drive is available in a 256GB capacity, securely transfers data at speeds up to 240MB/s, has the worlds best security with FIPS 140-2 Level 3 certification, and is available at the retail level at a price that could only be expected for such a device.  The SPYRUS Workplace Pro truly is the James Bond of Flash Drives.

The SPYRUS product that we have in hand for this report is the Spyrus WorkSafe Pro, however, SPYRUS offers a complete line of products that include the following:

Pricing for the WorkSafe and WorkSafe Pro is listed as $99 – $125 for the 32GB capacity, $155 – $180 for the 64GB, $325 – $385 for the 128GB and $475 – $550 for the 256GB capacity.  There is limited availability at CDW for this product, however, those truly interested would be best to work with a system integrator, VAR or SPYRUS for customization as so many different system configurations are possible with this flash drive.

The SPYRUS WorkSafe Pro is a SuperSpeed USB 3.0 flash drive that boots into its own environment.  It is available in 32, 64, 128 and 256GB capacities and performance is listed as high as 240GB/s read and write date transfer speeds. It contains military grade XTS-AES 256-Bit encryption, all cryptographic functions are performed in the hardware, and the hardware is covered with a tamper-evident epoxy. It is the ONLY Microsoft-certified Windows To Go drives that delivers the identity and rooted authentication capabilities of a full smart card.

Both the WorkSafe and WorkSafe Pro drives contain a FIPS 140-2 level 3 PKI Rosetta tamperproof smart card chip embedded within the drive, and both are Windows 8.1 compatible as the OS had to be modified to support the CCID reader that enabled SPYRUS authentication features. In short, the SPYRUS WorkSafe Pro can serve as a Smart card when not booted. The key to this flash drive lies in its layered encryption where data can never be illegally accessed deleted or modified, and as well, all encryption keys are never stored in the systems flash memory. The user can still go further by adding optional BitLocker security as an additional layer of protection.

BOOTS INTO ITS OWN ENVIRONMENT

Perhaps the most interesting feature of the SPYRUS WorkSafe Pro is its ability to boot Windows 8 from virtually any Windows 7 or 8 PC.  In addition, it can be configured to boot into Apple systems and our review sample took only seconds to boot into our MBA, leaving us with a complete Win 8.1 environment that could not access, or be accessed by the MBA system or SSD.  This is only one of many configurations and the drive can also be configured with Data Vault which provides for a separate partition that can be accessed from PCs when the drive is not first booted into its own environment.

Data Vault Access can be limited to Read Only mode, eliminating unauthorized alteration or deletion of viles in the Vault.  Last but not least, the SPYRUS WorkSafe flash drives also contains a similarly named  ‘Read Only Option’ that returns the drive to its original state when shut down, erasing all trace of user activity, downloads, and potential malware picked up while surfing the net.  This feature provides the ability to run your fully secure OS environment while on the road in such vulnerable systems as airport kiosks, school or library PCs, or over untrusted Wi-Fi connections. Last but not least, SPYRUS Enterprise Management System (SEMS) enables remote password reset, audits, disabling and physical destruction of the flash drive.

The SPYRUS 256GB WorkSafe Pro is constructed of a flat black metal exterior and cannot be disassembled without destroying the drive.  The interior of this SSD is most likely similar to that of other flash drives, containing a PCB, controller and NAND flash memory, however, the SPYRUS flash drive is filled with a permanent and tamperproof epoxy before finally sealing the flash drive.  All that can be said about the components is that this SSD supports Intel, Micron and Toshiba NAND flash memory and that it has a multi-chip architecture that allows the use of several SATA to NAND controllers.