A few months back we posted what would be one of the first reports on SD Express 7.o (SDx) and its potential in the media storage industry.  This report brought to us transfer speeds of just under 900MB/s in a fully backward compatible SD Express card, the shape of which was identical to that of any typical SD card.  It was simply plug and play and seemed to be well on its way.  This report brings us forward a few months to the latest SD Express 7.0 entry from Ritz Gear which is available right now at e-tailers, a bit sooner than we expected and perhaps a bit…rushed. 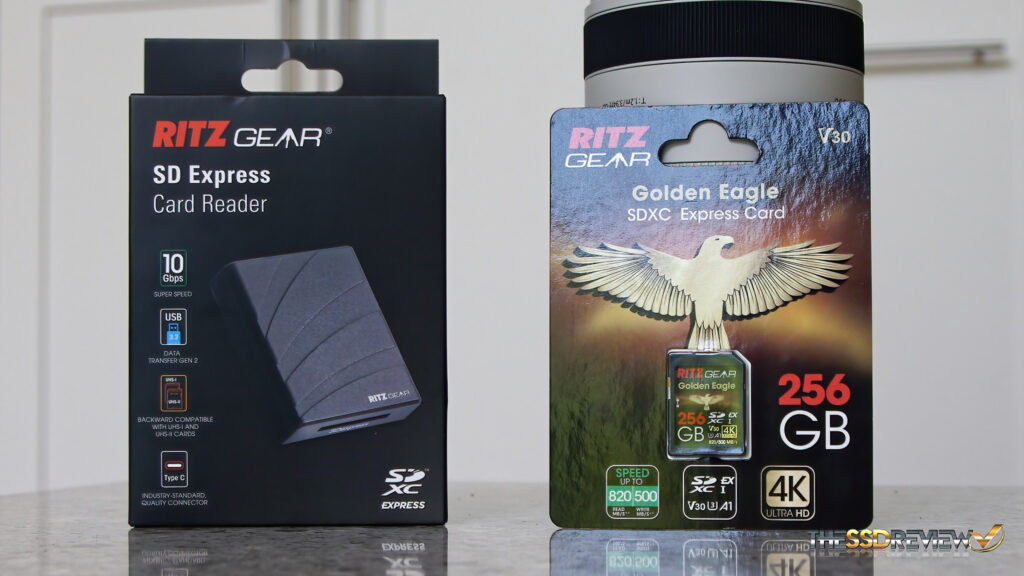 Today we are evaluating the Ritz Gear Golden Eagle 256GB SDXC Express Card along with its USB 3.2 10Gbps Type-C SD Express Card (SDx) Reader.  Both pieces right now can be found at Amazon, sold together and at a 50% discount for $150, $299 with a 50% coupon when you place a checkmark in the appropriate box.  Not so fast though.  This SDx card boast performance of 820MB/s read and 500MB/s write yet only holds a UHS 3 speed class of 30MB/s and V30 video speed class of 30MB/s.  We found this a bit odd, especially since there was no mention in the advertisement of it being UHS-I or II much as you see in any advert on Amazon.  There is a reason.

Let’s tackle all we need to know first to achieve top performance.  First off, your base system needs to be USB 3.2 10Gbps capable and contain a Type-C port capable of accommodating the included cable.  One could not achieve top performance of 820MB/s without that.  Next up,  something that is not advertised but should be known is the fact that, although SDx 7.0 is backward compatible, it is ALWAYS at UHS-1 speeds of max of just over 100MB/s. SDx uses a single lane in the PCI bus whereas other SD cards utilize the UHS bus. This means that my Canon EOS R5 will only have this camera perform at just over 100MB/s max as will several other more recent cameras and external readers.  Full performance from a SDx 7.0 card CAN ONLY be achieved through a SDx card reader plugged into a 10Gbps PC Type-C port.

The Ritz Gear Golden Eagle SDXC Express Card is waterproof, temperature proof, shock proof, x-ray proof and comes with a A1 rating for smartphone applications which means it has a minimum random read of 1500 IOPS, write at 500 IOPS and minimum sustained sequential data transfer of 10MB/s. Lets take a closer look at this cards performance as advertised and tested with Crystal DiskMark… in its own SDx Reader.

The performance returned in our initial test was impressive to say the least, but that’s not the entire story with today’s media and this becomes a bit obvious when we decide to test for sustained performance.  Remember, this card has a V30 rating which many might find a bit out of place beside transfer speeds of 820MB/s read and 500MB/s write.

In transferring our 85GB 8K video folder, the transfer speed was dead on at 500MB/s for the first 25GB and then performance dropped like a rock to just under 30MB/s where it remained for the rest of the transfer.  Now we might find this odd but this is EXACTLY as advertised with write performance of 500MB/s and sustained write speeds at V30…of 30MB/s.  If we would have run this through any other SD card reader in the world that is not specifically a SDx reader, we would have seen performance of around 100MB/s max initially, followed by that drop to just under 30MB/s.  The reason for such is the fact that the memory in use for this device is QLC NAND without a buffer chip and using a specific partition of that QLC NAND in SLC mode to create that buffer.  When the buffer fills, performance drops.

At days end, if the Ritz Gear Golden Eagle serves your needs and you believe it may be just what you seek, congratulations.  My concern lies with those that have premium cameras and buy this thinking that they are doing a good thing.  You gotta know that, at the most inopportune moment, they will learn that their UHS-II camera that should be bringing in transfer speeds of over 300MB/s, is bottlenecked at 100MB/s because of this card.

Myself, I run a Canon EOS R5 with the full gambit of EF and RF lenses and most often one might find me behind the Canon 100-500L.  I shoot nature mostly and, for that fact, the present configuration of SDx doesn’t serve me well.  I rely on the performance of CF Express Type B whole heartedly, but you can also find a UHS-II V90 right beside it as a backup.