The SSD Review uses benchmark software called PCMark Vantage x64 HDD Suite to create testing scenarios that might be used in the typical user experience.  There are eight tests in all and the tests performed record the speed of data movement in MB/s to which they are then given a numerical score after all of the tests are complete.  The simulations are as follows:

The PCMark Vantage x64 HDD Suite provided us with an overall score of 24764 points which surpassed the Intel X25m 160GB result of 23124 points and brought it right behind the OWC Mercury Extreme Pro RAID Enterprise SSD best of 27983.  We considered this an ideal opportunity to compare it to another mid-range solid state drive which has been recently released so we elected to run the new Kingston V100 128GB SSD through Vantage one more time and came up with a total of 20855 points.  This proves to be an excellent comparison as both contain the JMicron stamp on their controllers, the Super Talent with the JMF616 and the Kingston with the JMF618. Lets also throw a Samsung Spinpoint 1.5TB hard drive into the mix for a true indication of the difference a SSD makes to system performance: 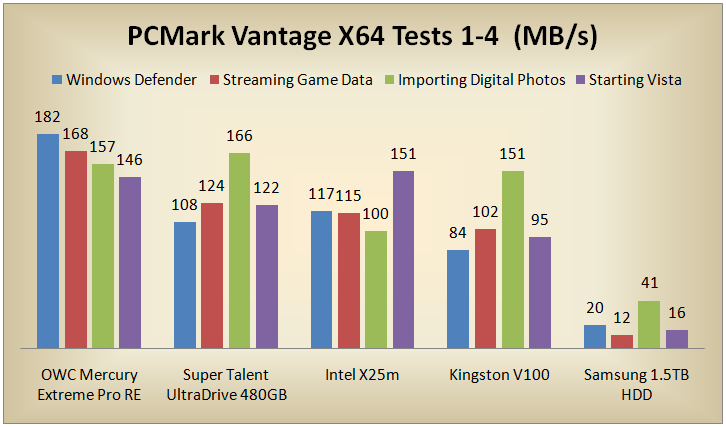 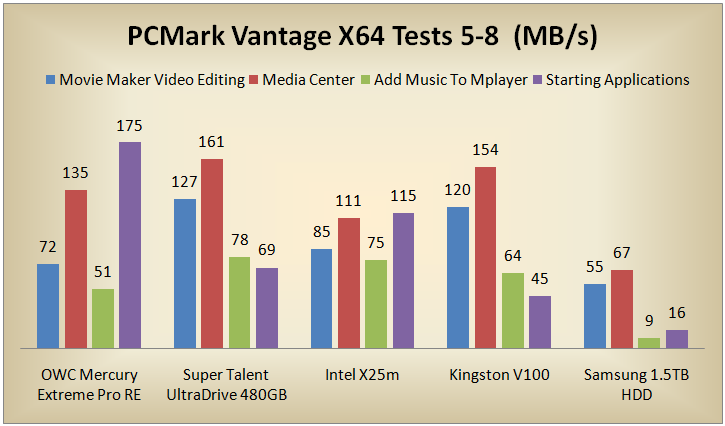 First and foremost, we have to thank Peter Carcione and Super Talent for allowing The SSD Review this exclusive opportunity to show the consumer that manufacturers are keying in on our need to have capacity in our solid state drives.  This 480GB solid state drive will be available for purchase sooner than one might thing.

Performance was a bit unexpected and it was great to see the UltraDrive, which is considered to be a mid-range performance SSD, surpass that of the Intel and fall just short of the OWC enterprise release, both of which are high end performers.  Size and performance are now available and if we can tackle the issue of pricepoint, we may have a home run.

The final price has not been set for the Super Talent UltraDrive 480GB SSD but there are whisperings that it will be above the $1000 price barrier which is going to bring it above the $2/GB price point.  As much as we all want to see the price remain a bit lower, we need to remember that this review is of a 480GB solid state drive which is double that of the present high capacity consumer release we have now.  A quick look around at the price point of other oems selling similar capacity drives shows us an average price of around $1400-1600.

If Super Talent can find the ‘sweet spot’ for a drive of this capacity, they just may do better than a simple home run with this release.