Over the last few SSD reviews, we have been introducing our readers to a new benchmark program called Anvil Storage Utilities which is an absolutely amazing program when it comes to benchmarking solid state drives.  Not only does it have a preset SSD benchmark, but also, it has included such things as endurance testing and threaded I/O read, write and mixed tests, all of which are very simple to understand and utilize in our benchmark testing.  Lets take a look at the Anvil Pro SSD Test result for the Renice X3: 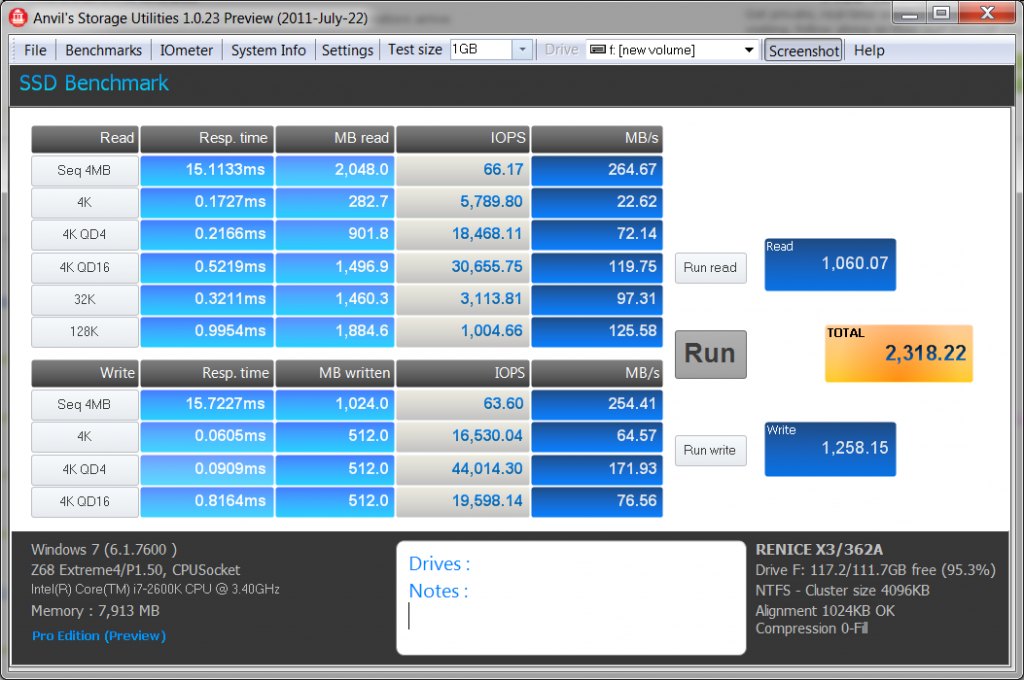 We were happy to see the transfer speeds remain consistent but didn’t expect to see the 4k QD4 write result of 44,013 IOPS as listed specs were 30,000.  A great option of Anvil Pro is that we can fine tune our IOPS tests so we thought we might push the numbers as high as we could get them.  Here we have the test at 4kQD32 in random write disk access:

Although we have yet to reach SATA 3 bandwidth max, there will be a number of manufacturers introducing SATA 3 drives in the next few months. Next to actual true to life testing which can take an insurmountable length of time, PCMark Vantage is the only program that can compare any SSD, side by side, regardless of SATA interface or controller in use.

The Renice X3 had a fantastic result in Vantage with a total of 42474 points compared to previous highs of 34617 points by the Samsung PM800 mSATA and 33570 points by the Intel 310 mSATA.  The game has changed, however, and it is only fair to retest as we have updated our motherboard specifications from P67 to Z68.  We decided to put the Intel 310 through its paces again and the result increased to 39793 points.  Unfortunately, we could not update testing on the Samsung PM800.  Lets take a look at the transfer speeds of the Renice and Intel in a comparison chart.

It was a bit unexpected to see that the Renice X3 fell behind in all tests except Video Editing and Media Center which tests, amongst other things, video recording, editing and streaming.  These tests are conducted mainly with incompressible data where we might expect the Intel to prevail.  As it stands, even after 3 separate runs at the test, the SF-1222 equipped Renice did significantly better here.

Introduction to The X3 and Its Build

The SATA 2 SSD Hierarchy and Our Verdict