About a year ago, we published our review of the OWC Mercury Accelsior PCIe card, a storage device that utilize two blade style SSDs in RAID to achieve incredible performance and capacity for your desktop Mac or PC.  The beauty of the Accelsior was that storage was upgradeable, making it a very affordable option for the media professionals growing storage needs. The Accelsior was deserving of our Innovation Award at the time and achieved great performance of 765MB/s read and 740MB/s write. 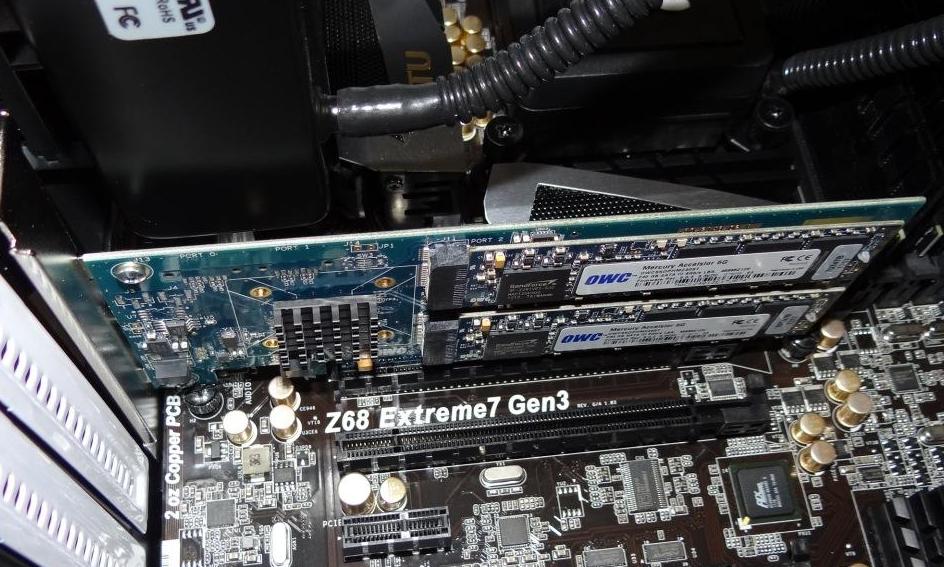 It wasn’t long after that we were contacted by OWC once again and subsequently reviewed their new Mercury Helios Thunderbolt Chassis that enable external storage of the Accelsior, along with many other solid state drive models.  We tested the Accelsior in the Helios for transfer speeds of 706MB/s read and 593MB/s write performance, but just for kicks, we also through in an Intel 910 Data Center PCIe SSD, valued at somewhere around $3000, that provided results of 900MB/s read and 836MB/s write performance.  Our new found love for Thunderbolt was obvious and that Helios has been front and center on my desk since. Once again, the Helios grabbed our Innovation Award.

It seems that OWC has been at it once again and we recently received a new OWC Accelsior E2 PCIe SSD, fitted with two 240GB blade SSDs for excellent performance and capacity once again.  The Accelsior is the latest design of the OWC engineering team and contains two 6Gbps eSATA ports that provide for external storage up to 32TB as well as performance similar to the original Accelsior.  Once again, OWC has caught us off guard and this seems to be a first and great idea for increasing performance to another level and increasing capacity significantly.  The beauty of the Accelsior has always been its expansion capabilities but this knocks the original capacity maximum out of the ball park.

We had to marvel in the thought that, utilizing our Helios Chassis, our local storage needs became pretty much limitless and the performance of both the original RAID configuration of the blade SSDs, along with the potential of the two eSATA ports being RAIDED was excellent.  On top of that, details aren’t too clear yet with respect to exact price but OWC is offering an upgrade program for original Accelsior owners.  Let’s take a closer look at the E2.

As we can see, the Accelsior remains to be OWC blade SSD driven and the only real difference appears to be the inclusion of the two eSATA ports.  The 0GB card alone (without SSDs) lists for $199, the 240GB version for $479, 480GB for $749, and for those space lovers we have the 960GB for $1329.  Expansion is extensive with SSD upgrading and even adding on a Helios for external storage.