The Revo 3 x2 consists of two printed circuit boards, known as the mother and daughter board, each containing two SF-2281 processors and 16 modules of Micron 25nm 29F64G08CBAAA asynchronous NAND on each side of both boards for a total of 64 NAND pieces. Each module is 8GB storage for a grand total of 512GB RAW capacity to which 4 modules (or 32GB) are utilized by the SSD for over provisioning and firmware needs.  Formatting then leaves the end user with 447GB of available user storage. 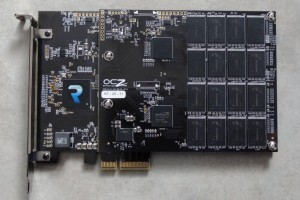 For those new to PCIe installation, its a very simple click into the PCIe x4 slot of your motherboard and installation of a quick driver.  PCIe is the magic of this form factors speed (Sorry SandForce 😎 ) because it eliminates the bottlenecks experienced with SATA 2 and SATA 3.

A typical SATA 2 SSD would max out at 285MB/s high sequential read with new SATA 3 SSDs at 525MB/s, whereas, PCIe still isn’t close to any bottleneck. In fact, by the time we are in need of faster speeds, someone will find a way to pair up two Revo 3 x2’s in a motherboard configuration similar to SLI.  Hey…. Now thats a thought!  Could we RAID two of these cards ? Hmm….

LATE UPDATE:  Consumer versions of the Revo 3×2 will be slightly different than the early engineering samples sent to reviewers.  Not only will the firmware have been fine tuned, but also, the consumer retail version will have heat sinks to reduce heat brought on through the 4xSF-2281 processors in heavy enterprise and enthusiast activities.

VCA TECHNOLOGY AND TRIM – DO WE HAVE TRIM OR NOT?

OCZ Revo and Z Drives have a new architecture called VCA (Virtualized Controller Architecture) Technology  along with their Superscale storage accelerator which they believe is going to be the key to Revo and Z-Drive success as it enables amazing performance outside of a RAID design.  Full explanation can be found here (PDF download) but, suffice it to say that it now makes TRIM possible including a host of other features to include SMART monitoring, NCQ, TCQ, power fail management as well as enhanced wear leveling.  There is a catch however…

All standard checks, including software applications, show TRIM as being active.  OCZ says the Revo 3×2 Card supports TRIM because the architecture is based on SCSI.  The MS Windows Storport architecture, however, does not presently support TRIM or SCSI UNMAP.  Conversations with OCZ regarding this revealed that OCZ and Microsoft are working together and the functionality should be enabled in the near future.

Having clarified this somewhat, the inclusion of TRIM will be no more than a bonus when available and is, in no way, detrimental to the operation of the drive.  As a result of SandForces excellent ITGC capabilities and firmware characteristics, TRIM just isn’t what it used to be and perfect examples can be seen in both the Revo and Revo x2.    Neither supports TRIM and there are tens of thousands of owners that will attest to the fact that they perform today as they did at day one.

This is The SSD Review Test Bench and a quick click on the photo will bring it up full size for closer inspection.

The first four do a great job of showing us the numbers that we want to see, or dont want to see in some cases, while PCMark Vantage x64 is an excellent program which recreates tests that mimic the average users activity, all the while providing a medium to measure each.