When we last met I provided an Introduction to the Solid State Drive in an effort to enlighten you a bit on the basics of SSD, an up and coming technology in our present day digital revolution.  Since writing that article I have been fortunate enough to speak with manufacturers of SSDs, along with companies such asSiliconSystems and STEC Inc who utilize the SSD at the enterprise level.

In trying to find the light of day through all the “white papers” I was so kindly provided by these companies (and did read by the way) I have a deeper knowledge of the importance of SSD today.  The SSD is used in F-16 fighter jets, M-1 tanks, weapons targeting systems, telecom systems, medical systems, as well as industrial automation applications.  The defense, telecom, industrial and medical fields all count on the reliability and lifespan the SSD offers for their mission critical goals.

I initially believed the speed advantage of SSD over an HD would be the key factor in its adoption, but was surprised to learn that the lack of moving parts and ability of the SSD to withstand drastic weather changes and extremely turbulent conditions were more important for the earliest adopters.

Unfortunately, I don’t have the ability to scientifically test shock resistance qualities of SSDs, so In today’s article I’m just going to focus on the speed aspect of three SSDs and one HD I have on hand. I am going to provide a speed comparison test between three solid state drives and one hard drive.  The solid state drives being tested are the Mtron Mobi 3000 32Gb, Samsung 64GB, and Sandisk 5000 32GB while our hard drive contender is the 160GB, 7200RPM Seagate Momentus.  The hard drive is considered to show the difference between the SSD and HD technologies. 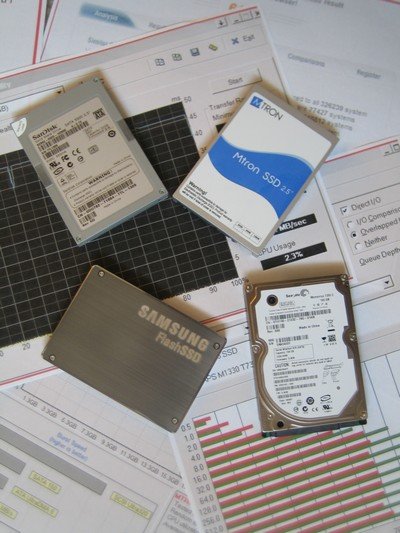 The competition is lined up: clockwise from top left is the Sandisk 5000 SSD, Mtron Mobi 3000 SSD, Seagate Momentus HD and Samsung 64GB SSD.

The laptop test system being used with each drive has the following specs:

This system is setup up with the Advanced Host Controller Interface (AHCI) enabled. There has been a lot of discussion relating to AHCI lately, as a bit of a background you might want to read about AHCI in this Wikipedia article.  During testing the XPS M1330 laptop is setup to be as stable as possible.  Such toys as Object Dock, Vista Sidebar, anti-virus programs and even my Internet and Bluetooth connections are shut off to ensure that the system is as stable as it can be.  Many have run benchmarks using programs like HDTune and wondered why there is spiking in the final graph result; leaving resource hog applications open during tests is why.

I have relied on several programs for my benchmark tests.  These include PCMark05, WinExperience scoring, Atto HD Benchmark, HDTune, HDTach and I have also tested the startup times myself with a regular old stop watch. The results of these tests are best served through a chart which is displayed below.  To assist visually, the top scores are listed in red while low are in blue.

It is important to note that each program runs through its own manner of testing and, as such, you may see deviations in read or write speeds from program to program.

Many will simply look at the results and rely on the red to show you which SSD stood out as the fastest, and they will be correct.  The Mtron Mobi 3000 series shows itself to be well above the rest.  In fact, it may well be the single fastest storage medium available to the consumer today.

Let’s educate ourselves a bit though shall we?  Let me provide a basic explanation of exactly what needs to be known for interpretation of these scores above.

“Disk Read” — is measured in MB/s.  It is the rate at which information is pulled from the drive to be read and start a program or provide information for a program. To give an example, have you ever opened a document only to scroll down and have to wait for the information to be read from the disk?  That’s the symptom of a slow data read. Most SSD systems of today’s level can pull multi-gigabyte documents up in such speed that you will never even notice a delay. Looking at the HDTune charts below, you can see that the Mtrondrive speed of 96 MB/s is well ahead of the pack and the Seagate Momentus is much lower with sustained readings of about 44.6 MB/s according to HDTune. It is interesting to note that the hard drive starts out with a great read speed but hard drives, unlike SSDs, have a decline in performance through continuous read/write activity. 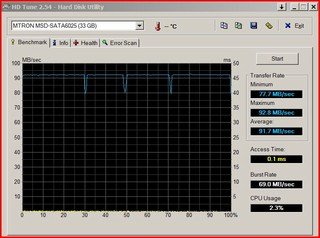 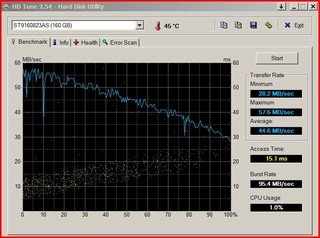 “Disk Write” — is the rate at which a drive copies information from a location, such as RAM, to the drive.  Have you ever downloaded a large video in Vista?  An example of writing to the disk is best shown when the document has been downloaded completely and then you will see a window appear while its moving it from the temporary folder to its permanent location on the hard drive.

“Disk Access” “ is probably one of the most important things to consider when deciding if you want to move to the SSD. It is measured in milli-seconds and is the reason there is such a great increase in speed for booting an OS such as Vista and being able to play within the system.  This speed is the time in which a piece of information is found on a sector of a drive, pulled up and read.  Most hard drives are in excess of 10ms, as shown in the 15.1ms time for the Seagate. Meanwhile, SSDs such as the Mtron are reaching new heights with less than 0.1ms access time.  The reason for this is because the hard drive has to wait for the disk to spin and information to become available whereas with NAND flash, it is available almost instantly.

“Burst Speed” “ is the speed in which information can be read through the drives onboard read ahead memory.  To date, hard drives have been able to return higher burst speeds through testing.  The Seagate’s burst speed return of 179.8MB/s seemed rather high, but the test was performed three times to confirm it. HDTune reported the Seagate Burst speed to be just below 95MB/s which put it closer to the Mtron burst speed of 69.0 MB/s.  In considering the burst speed, one should keep in mind that this reflects the reading of only a small amount of information over a very short period of time. I believe the more realistic approach is to look at the sustained speed of larger files combined with the disk access speed.

You might like what you see with these SSD benchmarks and decide you want one, but availability continues to be a hardship of the SSD — many are not yet available through public distribution at reasonable prices. Mtron products can be purchased through only a couple of resellers in North America, DVNation or RocketDisk. The Samsung SSD seems to be only available through a system purchase with companies such as Dell. Sandisk drives can be found online at places like CDW.com and eBay.com. Other companies such asMemoright make available IDE SSDs while Ritek USA expects to release their version of the SSD in North America within weeks.

Fast as the Mtron Mobi 3000 might be, catching it in a store could be the problem

A great deal of credit must go to Mtron for their advances in SSD technology in such a short period of time. Whereas other companies are trying to tackle the SSD size problem, Mtron elected to work on its SSD with respect to performance first. They are the forerunner in all but two of the tests conducted.  Their Mobi 3000 SATA SSD is soon to be upgraded by the Mtron Pro series for consumer and enterprise which claims a read speed of 120MB/s and write of 100MB/s. I look forward to its release for review.

Credit must also be given to the two other SSDs as they do meet the needs of consumers in respective categories, the Samsung with its generous 64Gb size and the Sandisk 5000 32GB for its low price — it can be found for below the $400 mark.

The key is that SSD is making a fast entrance and performance is quickly improving on top of what was already excellent performance. Consider that the maximum write speed for an SSD a month ago has jumped from 13MB/s on the Sandisk to a mind blowing 71MB/s on the Mtron, with another jump soon to make its appearance — you get the point. The SSD is the fastest storage medium available and not soon to be beaten by anything on the horizon.

While speed is a very important advantage to these new SSD devices, one thing I was not able to test properly was the shock resistance qualities and longevity of these drives. Knowledge that the military has tested and is using SSDs in F-16 fighters and M-1 tanks would lead you to believe we can probably rest assured the data on a laptop SSD is safe from drops and even old Father Time as well.