In late 2020, Canon introduced the EOS R5 mirrorless camera and that set off a frenzy of companies rushing to market the latest and greatest in CF Express Type B memory cards.  The sheer speed of CF Express B moved digital media into a new realm where photographers and videographers could capture moments that were once impossible.  Don’t get me wrong.  CF Express was being used in the EOS DX-1 before this, but the R5 took this level of photography out of the hands of the professional and moved it into the much larger market share of camera enthusiasts. So… CF Express was born. 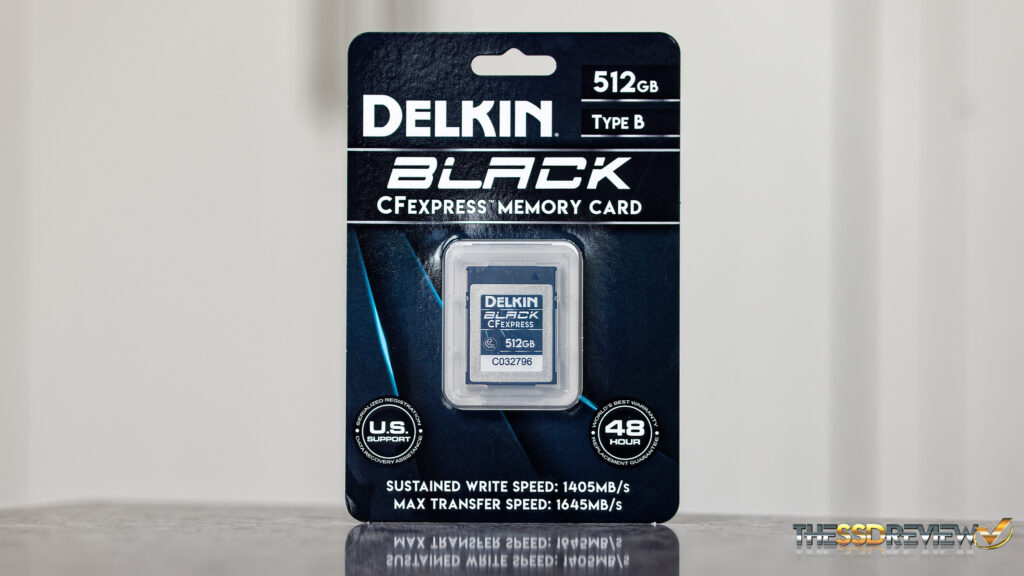 Even today, there is a constant back and forth over the real need for CF Express Type B if you aren’t looking for high end video.  Even if you are a straight photographer, your pictures are moved from the buffer to the card at incredible speeds, ensuring you aren’t stuck and losing the all important picture because of the filled buffer at a wedding, or race car event…or getting that one in a million wildlife shot.

As a photo enthusiast who likens himself a half decent wildlife photographer and a Canon EOS R5 owner, I will be the first to admit I wouldn’t ever go without a CF Express Type B card in my camera.  This is exactly why The SSD Review is so involved in testing CF Express Type B memory and surpassing the simple benchmarks.  In this report, you will find sustained write speeds, temperature and true data throughput testing in addition to typical benchmarks.  And so we have the newest Delkin Black CF Express Type B 512GB Memory Card on our Test bench this morning.

Delkin Devices has introduced the Delkin Black in answer to the growing concerns of earlier CF Express Type B releases with high temperatures and low sustained write speeds.  In the R5 specifically, those low write speeds would restrict the cameras ability to shoot high resolution videos, with the 8K option not even appearing on the cameras menu.  The Delkin Devices Black CF Express Type B Card is available in capacities from 64GB to 512GB, range from 1645 to 1760MB/s read and 1400-1710MB/s write throughput, and it’s waterproof, shockproof and able to sustained extreme heat and cold temperatures. In fact, the Delkin Devices Black memory card family  have been tested to 72 hours water submersion, 80lb direct force and their temperature range is -25°C-185°C.

The back of the provided packaging does a great job  of letting us know what we can expect in both photo and video.  There is another key to the Delkin Devices Black memory card family and that is that this card has a lifetime warranty with 48 hour replacement guarantee, not including weekends.  This is a rather unique warranty which we haven’t seen elsewhere and speaks highly to Delkin’s own confidence in their product.

The Delkin Devices Black CF Express Type B Memory Card is brand new to the market and we are only now seeing limited availability with prices ranging from $499 to $899 for the 512GB capacity.  Check Amazon for availability and pricing.