We left the best for last as we believe that PCMark Vantage is the gold standard of benchmark evaluations.  The data simply cannot be manipulated and a result is provided based on the transfer speeds observed in eight simulated user activities. This is also a widely accepted opinion held by many reviewers and storage enthusiasts.

Through Vantage, the user gains large benefits in the write-back feature of the  RAID card as the card holds the writes in the cache until the devices are not busy. This benchmark uses both mixed read/write tests and is a good test for overall performance.

There are eight tests in all and the tests performed record the speed of data movement in MB/s to which they are then given a numerical score after all of the tests are complete.  The simulations are as follows:

Ummmmm.  We really didn’t believe the scores so we had to conduct them twice.  We tested once again after they resulted in much the same.  WE finally sat back and agreed that the only way the reader might believe the final scores would be to post the actual results: 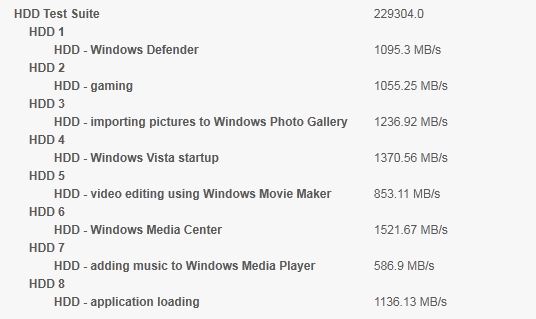 The Areca 1880ix RAID Card is based on the LSI2108 ROC controller is simply the fastest raid controller chip available to the public today.  With many solutions struggling to handle the sheer speed and power of SSD’s, more and more computer enthusiasts are using raid cards and Areca has taken the reigns here.  With its configurable amount of RAM cache for the array, the performance is simply hard to beat.

One of our primary goals was to show the advantages of using a full featured RAID card with a large cache as a common fault of most other RAID arrays and devices is instability within the RAID itself. If we were to lose power, have a blue screen or any type of system error, 9 times out of 10 that array is going to be lost. This can result in tons of lost time, and for the average user, long painful reinstalls, not to mention loss of precious data.

Simply put, the choice of such a card ensures greater data integrity and safety, especially if a Battery Backup Unit (BBU) accompanies the configuration.  This allows unwritten data to be transferred to your array upon reboot, regardless of how the system was shut down. Your odds of losing data in these types of scenarios is vastly lower through use of a RAID card such as the Areca.

A RAID on ones motherboard draws upon the CPU power directly, unlike a RAID card with its own solution.  Every time the system is under load, CPU activity is increased to process the system RAID, thus reducing availability elsewhere and reducing the potential performance of the system as a whole.  A RAID card such as the Areca has its own CPU which totally eliminates the need for CPU activity at a time when the storage engine is at its peak.

Without cards such as the Areca, speeds as we have seen here simnply aren’t possible through a motherboard enabled RAID solution.  The cache of the card provides a buffer which increases storage transfer speeds. as seen most often in video editing, gaming solutions, and intense multitasking.

If I may, I would like to offer a personal example to demonstrate just what this card is capable of. Some time ago I was using my system, as we see it here, and had to pause to realize the level at which the ‘machine’ was performing. Through use of two monitors, I was  livestreaming video of the miners being rescued in Venezula, speaking to a friend in Athens, Greece via MSN messenger video chat on one screen, and playing a video game in windowed mode on the other screen.

All gadgets were present on the desktop, my e-mail was up and running as was another instance of my web browser as I habitually sail through forums of which I am a member.  Just to see if I could push it that much further, I ran a full virus scan and had to smile as there wasn’t a lag or pause of any kind in the system. It was smooth as glass. As an enthusiast, we can see the benefits of the Areca in every day use through this example alone.  As a potential enterprise client, we hope that you can foresee the benefit that this card can provide for your respective environment.  We pushed it as far as it could go for that reason.

Would you like to discuss testing or see further tests conducted?