Here is a quick stat-sheet of the different chipsets and what they offer. As you can see, the Z68 chipset is identical to the P67 except only in two areas: 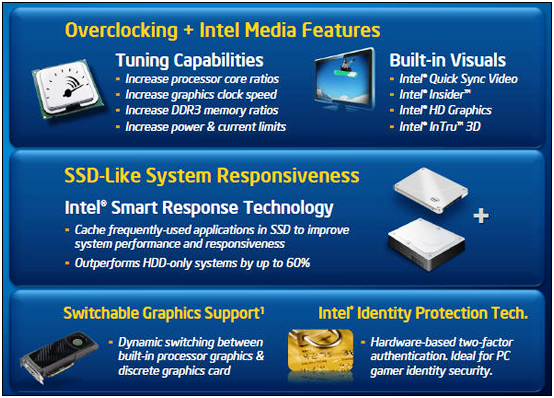 To start off the review, I would like to explore some of the unique features of the ASRock Z68 Extreme 4:

With PLX PEX8608 chip, it generates more PCI-E lanes for PCI-E devices so that all PCI-E devices are able to work at the proper speed simultaneously!

For users who are tempted to connect the SSD and HDD on motherboard, the Intel® Smart Response Technology can make the SSD become the “Cache of the HDD” to boost the HDD access speed. 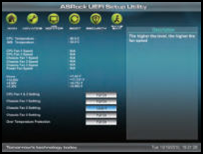 The major features of UEFI include:

2. Mouse Enabling “ Besides keyboard control, you can freely use a mouse to select your ideal settings in UEFI; and 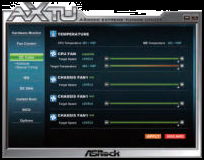 ASRock Extreme Tuning Utility (AXTU) is an all-in-one software to fine-tune different features in a user-friendly interface that includes Hardware Monitor, Fan Control, Overclocking, OC DNA and IES. In Hardware Monitor, it shows the major readings of your system. In Fan Control, it shows the fan speed and temperature for you to adjust. In Overclocking, you are allowed to adjust the CPU frequency, ratio and some voltages for optimal system performance.

In OC DNA, you can save your OC settings as a profile and share with your friends. Your friends then can load the OC profile to their own system to get the same OC settings. In IES (Intelligent Energy Saver), the voltage regulator can reduce the number of output phases to improve efficiency when the CPU cores are idle without sacrificing computing performance.

C.C.O., stands for Combo Cooler Option, is another exclusive hardware design on ASRock boards. C.C.O. provides the flexible options to adopt different CPU cooler types and matches your socket LGA775, LGA1155 / LGA1156 CPU cooler in the respective holes. Once again, ASRock has successfully expanded the utilization of PCB by the exclusive C.C.O. design.

Enjoy the ultimate 3D visual experiences“seamlessly“from your PC. Now you can watch your favourite 3D movies with Blu-ray Stereo 3D playback using active shutter 3D glasses. It delivers it all in 1080p full, high-definition resolution on your TV over HDMI 1.4.

The Intel Smart Response Technology is definitely the most intriguing feature of the Z68 platform, as it claims to drastically decrease load times by utilizing the SSD cache on a secondary hard drive.

The multi-display and Quick Sync GPU transcoding provided by LucidLogix are compelling features in their own right. Support for both hybrid NVIDIA and AMD cards is a great add-on and the ability to effortlessly switch between a dedicated GPU/GPUs and the graphics processor provided by a Sandy Bridge CPU not only allows for more efficiency in performance, but also, allows the user to experience features unique to both mediums.