If a company by the name of Other World Computing (OWC) sounds familiar, its because The SSD Review has evaluated several OWC SSDs including the Mercury Pro Extreme 40GB SSD most recently. That Mercury Extreme Pro is the highest performing SATA based SSD we have ever tested with a Vantage HDD Suite score of a mind boggling 44103 points. It does so well, in fact, that it even topped SSDs of the SATA 3 configuration and even one containing the SF-1500 enterprise processor. 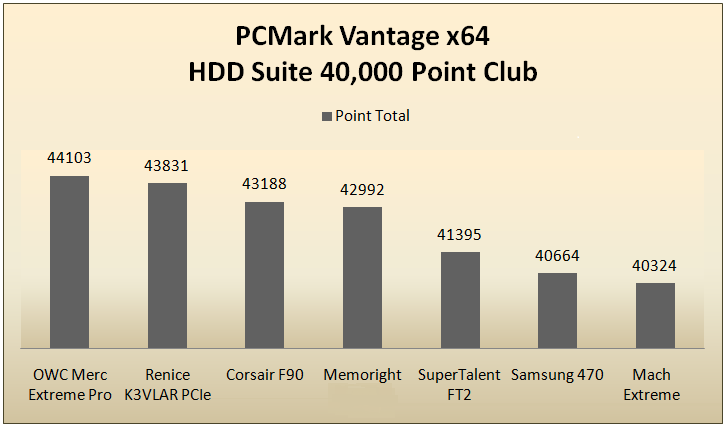 I won’t deny that I have a sweet spot for this company which is a bit unusual coming from a guy who has never once even tried a Mac. My admiration is for the day to day practices of OWC starting from the ground up, the customer. Their customer service is untouchable which is a huge benefit even when OWC does put out one of the best SSDs available at the lowest price anywhere. You can dig as deep as you want but pretty much every review out there says that their SSDs are not only the best you can get for a Mac, but that they are the best you can get period, whether it be for Mac or PC.

They are so committed that I happened to bump into the company Founder and President, Larry O’Connor, at a private function at Palms Place and we spoke of the SSD industry for well over an hour. How many other SSD oems are represented on the front lines by their president?  I can tell you first hand that I finally understand why OWC employees speak so highly of Larry. They are a family and quite frankly, he is right there in the trenches with each and every one of them.

Breaking News!!! The new Mercury Aura Pro Express is the first and only SandForce SSD which has been made specifically for the MacBook Air. It contains the SF-1200 series processor and is available in capacities from 180GB to 360GB and will only fit in the 2010 (or newer) MBA. With 3x the capacity of the factory SSD and 22% more performance, this is definitely going to become a hit.

On meeting with Grant Dahlke, OWCs Marketing, PR and Social Media Manager, he pulled me aside and waited until the area cleared before handing me the MBA Sandforce prototype and asked what I thought. I asked immediately if I could test it on a PC and Grant became very quiet. The drive is made specifically for the MBA and, unless we can get one with testing software, our readers are going to have to rely on a Mac site for this one.

I am confident, however, that this drive with the newest release of SF firmware just may top out as the Mercury Pro Extreme did above.

Similar to this and concentrating on specialty applications, netbooks and notebooks is also the Mercury Aura Pro 1.8″ SSD which is ‘SandForce Driven, contains 7% over provisioning and has the standard 3 year OWC warranty.

The most important point that can be made with respect to OWC SSDs is that they are one of, if not, the best SSDs available for your PC or Mac. We have received countless e-mails and pm’s in technology sites asking just how compatible they are in a PC. They install exactly the same as any other ssd and, well, if you have any doubts left at all, take a look at the reviews here. Specifically, take note of how many reviewers claim this to be the fastest they have ever put through their system.

Add to that the family atmosphere, next day shipping, value and immediate customer service and OWC is simply a great company for PC SSD sales as much as Mac. Congrats on such a successful CES OWC and heres is a closing picture of Rick Van Dyke, OWCs Sales Manager, showing our Associate Editor the benefits of being able to include both a hard drive and SSD as a boot drive in a Mac notebook.