Our visit to the ADATA booth at Computex 2015 this morning was rather interesting as it was the second time in two days that we saw a manufacturer introduce an external SSD with the newest USB 3.1 included, providing for much higher transfer speeds.  As new and unique as USB 3.1 is, it is (at least in my opinion) somewhat of an odd duck as it needs to rely on newer systems to incorporate USB 3.1 and Type ‘C’ Reversible connectors for it to provide full performance, albeit this new hardware is fully backward compatible.  All in all though, I wonder if this might be a tough sell as we saw with ThunderBolt or if it will fall right into place, given the popularity and market share of USB 3.0. 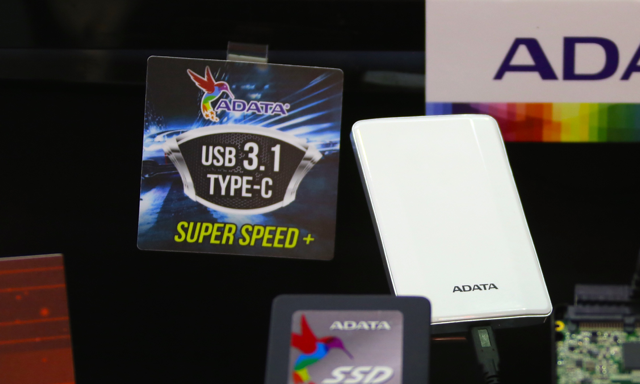 This the ADATA SE 730 USB 3.1 External SSD which relies on a Type C reversible connector. It is capable of 540MB/s read and 450MB/s write and is release is expected in Q4, although no exact date or pricing is known at this point.

The ADATA IM2P3738N is ADATA’s newest entry into NVMe M.2 space and is based on a Gen 3 x 1 connector which limits its speeds somewhat and initial performance maxes out at 641MB/s.  It is most likely going to be limited to oem availability and customization with capacities as high at 256GB.

On the enterprise side of things, ADATA was also showing off its newest IM2P3768N notebook form factor PCIe Gen 3 x4 SSD which is available in either AHCI or NVMe flavors.  This drive is capable of 3GB/s transfer speeds with capacities up to 2TB.  It also comes standard with ADATAs own NANDEDGE TM LDBC Error Correction Control and Management.  IN addition, enerprise drives comes standard with their newest NANO Coating technology which renders the SSDs moisture and dust proof.  Need proof, check out this block of ice with the SSD hard at work within!