Just a few years ago the enterprise SSD market was born and over these few years, we have seen SSDs evolve quite a bit to the point at which they are today. Prices seemed to be sky high for even the cheapest of drives, let alone anything of the PCIe flavor, and if we were lucky enough to have access to these drives, they were typically low capacity and used for special, high-performance applications and had specialized drivers. Today, however, the cost of flash has dropped dramatically with wider adaptation and advancements in the engineering behind the stuff. Die shrink after die shrink, manufacturers such as Samsung, Toshiba, SanDisk, Intel and Micron have pushed to pack more capacity into every NAND wafer they could. Quickly enough, the standard practice of shrinking the die wasn’t enough. At this point, engineers had to get creative and found the only way to continue in adding capacity and reduce cost was to move from a planar 2D design onto a vertical 3D one. Thus, 3D NAND was born. All NAND manufacturers have or are working on 3D NAND designs and each one differs from the other. While one could argue one is better than the other, in the end, what really matters to us is the end product. What drive delivers more performance, higher endurance, better power efficiency, more value per dollar? 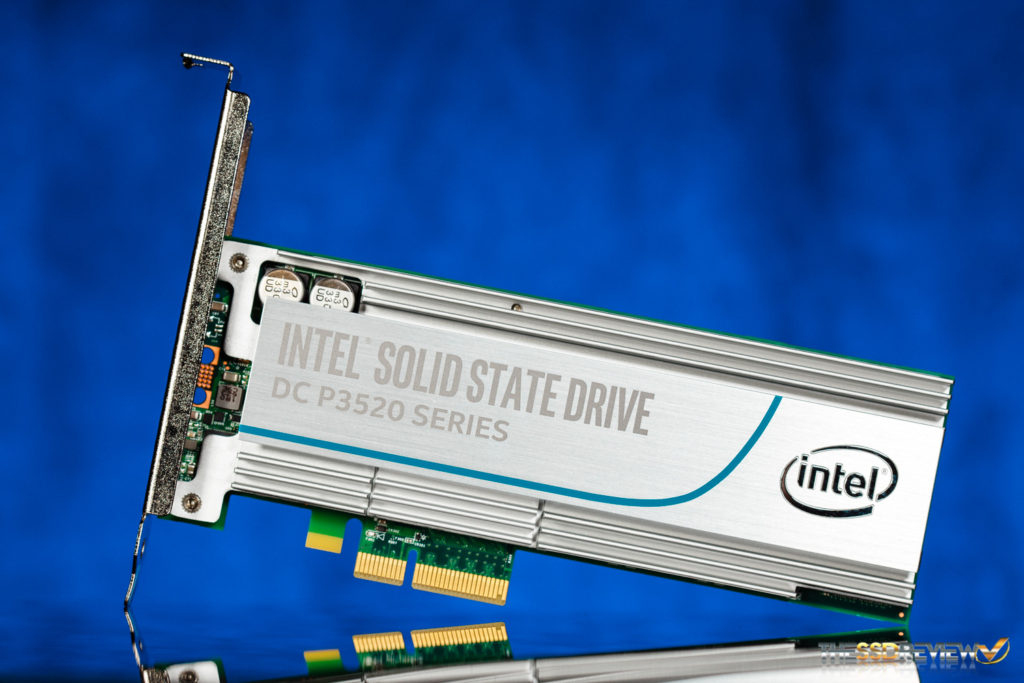 By focusing on these aspects Intel has pushed hard into the enterprise market and developed some great products. Today, we are lucky enough to take a closer look at yet another one of their enterprise PCIe NVMe products, the Intel DC P3520. The Intel DC P3520 is an addition to their DC P3500 series, their most cost-effective enterprise PCIe SSD line. This time around they have infused their latest 3D NAND into the drive to drive cost down more than we have seen before, to about $0.50 per GB! This alone is amazing in itself. Thanks to the use of 3D NAND they are able to nip at the heels of SATA SSDs in terms of pricing and yet deliver more performance. But, just how good is this new drive? Is the Intel DC P3520 really a good value? Read on and find out!

The Intel DC P3520 is a data center SSD that comes in both HHHL (half-height half-length) add-in card and 2.5″ 15mm form factors. It is available in capacities of 450GB ($290), 1.2TB ($635), and 2TB ($1,025). It utilizes a PCIe Gen 3 x4 connection to deliver sequential speeds of up to 1.7GB/s read and 1.35GB/s write. In terms of random read/write performance it can deliver up to 375K/26K IOPS. Typical read/write latency is rated at 100us/30us read/write. Endurance figures range from 590TBW to 2490 TBW and it has a 5-year warranty. It also has an MTBF rating of 2 million hours and an UBER rating of 1 sector per 10^17 bits read. As well, it features enhanced power-loss data protection, AES 256-bit hardware encryption support, temperature monitoring and logging, and end-to-end data protection. Hot-plugging is also supported on the 2.5” model. 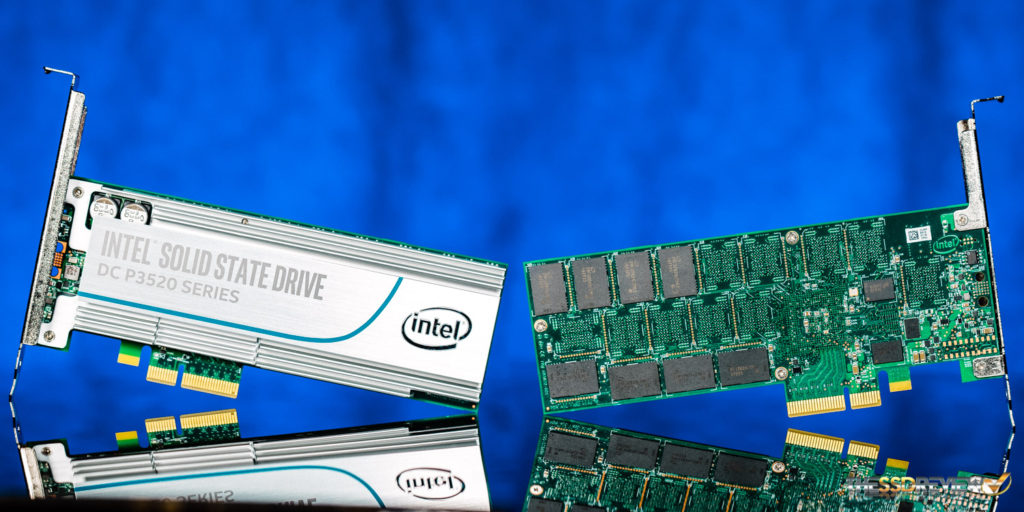 The aesthetics of the Intel DC P3520 are similar to that of the other Intel PCIe SSDs we have reviewed in the past. The large heat sink covers the many NAND chips, DRAM chips, and controller on one side. The backside is bare of any shielding or cover, unlike the consumer grade Intel 750. 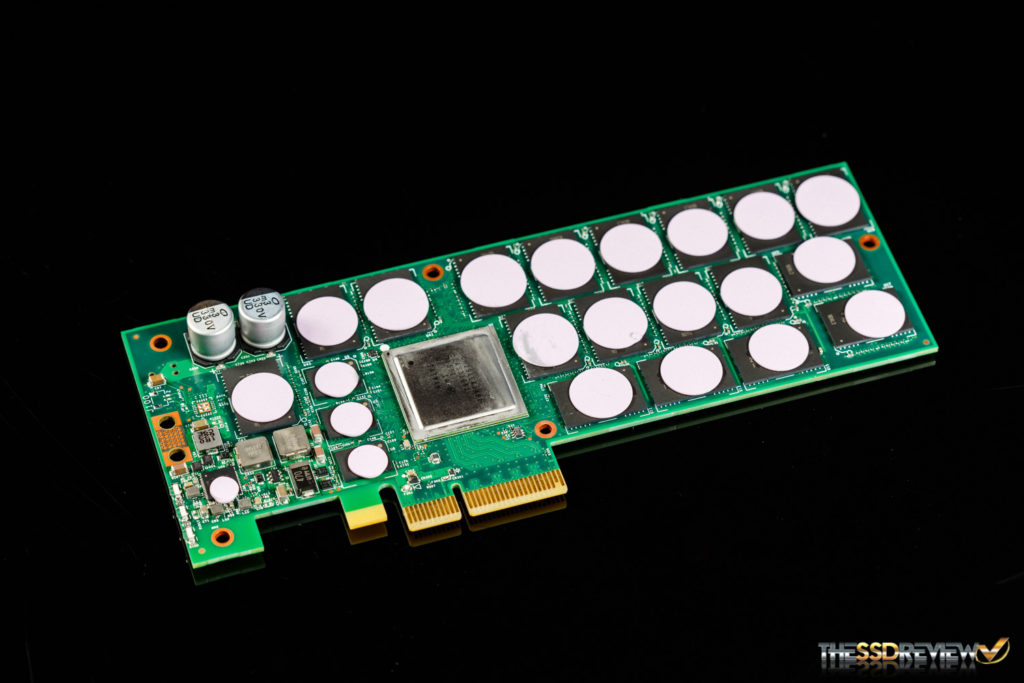 In total, there are 26 NAND chips in our 1.2TB sample, eighteen on the front and the remaining eight on the back side. Each is packed with Intel’s latest IMFT 3D MLC NAND. Additionally, there are two capacitors to retain energy to flush data in the cache to the NAND in case there is a power loss. 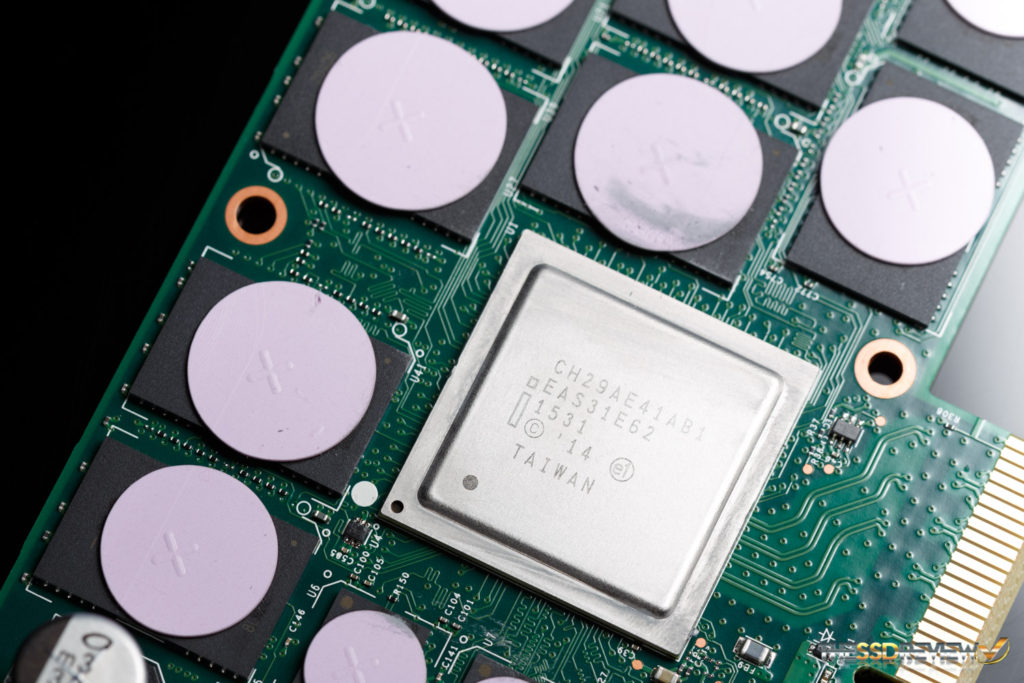 The controller is the same 18-channel controller utilized in their other DC P3XXX series and Intel 750 SSDs with a minor update to the firmware to work with the new NAND. 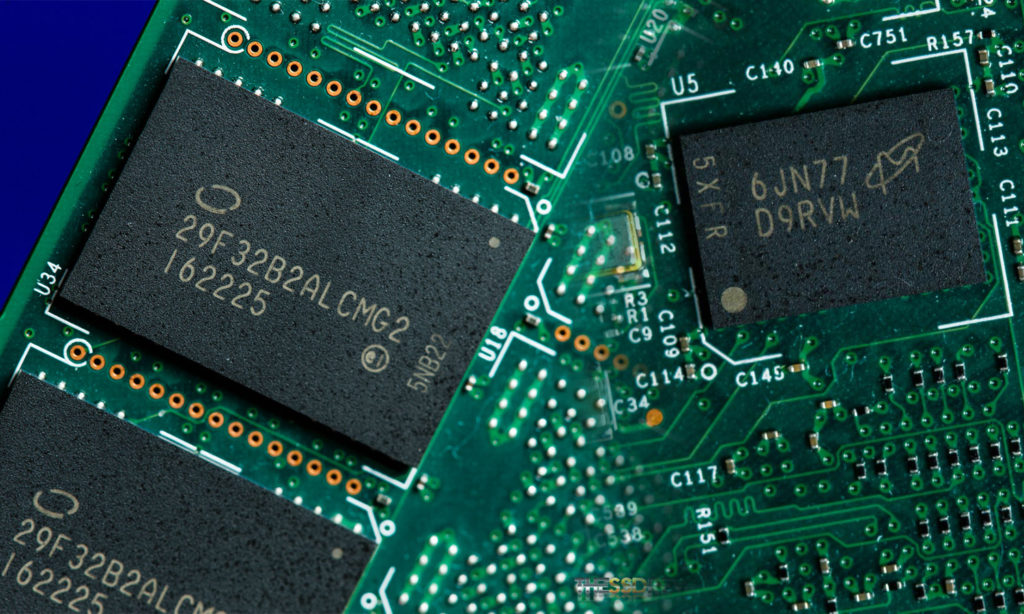 Additionally, there are five Micron DDR3-1866 DRAM packages in an ECC arrangement, which equates to 2GB usable for the cache.