Utilizing Toshiba’s BiCS FLASH­™ 3D flash memory and its vertically stacked cell structure allows for higher capacity in the same footprint.  Its charge trap cell and memory hole structure increases endurance.  Both higher performance and higher power efficiency are achieved by programming three pages simultaneously with fewer steps, and with the same power consumption as that of programming a single page. 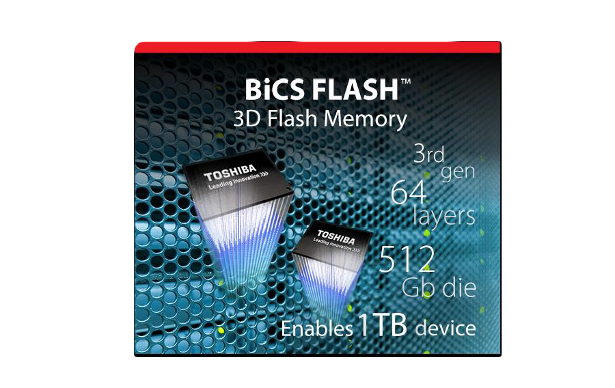 The XG5 is being offered in capacities of 256GB, 512GB and 1024GB in the M.2 x 2280 form factor.  Toshiba will also be offering self-encrypting drive (SED) versions of the XG5, making it suitable for a wide range of usage applications.

According to Jeremy Werner, vice president of SSD marketing and planning for Toshiba, “We are proud to introduce the first ever NVMe SSD equipped with 64-layer BiCS FLASH technology, and we expect broad adoption from our major PC OEM customer base.  The XG5 Series demonstrates Toshiba’s ability to deliver a cutting-edge, high performance and low power solution for client PC applications that can also be leveraged as a server of boot drive storage solution.”

Toshiba is rating the XG5 for sequential read speeds of up to 3000MB/s and sequential write speeds of up to 2100MB/s.  It also features an SLC cache to improve performance to accelerate burst type workloads as if often experienced with Windows-based PCs.  The XG5 also features improved standby power consumption, now less than 3mW, creating an excellent solution for mobile computing requiring high performance.  Stay tuned for review samples to land in our hands so that we can put the XG5 through our testing regimens and report the results.