Our featured picture is a Sandisk 64Gb SSD which is the size of a postage stamp.
.
The primary concern 99.999% of us have with respect to SSDs is the price.  The size of the ssd, for the most part, dictates price and let me precede this by stating that if you are looking to build a RAID setup consisting of 4-1 terabyte SSD drives, HIRE ME!!!
.
.
I am a great consultant, available for cheap and well, I can comfortably say you probably wont find many around with the enthusiasm for solid state drives that I seem to hold.
.
Although there are those that can comfortably afford to get what they want when they want it, most of us simply want to know that we got a great SSD for a great price without looking back.  There is another group, however, and I am going to ask you to be careful not to fall into this trap as it will steal away the thrill at a time when SSD technology is peaking.  This group sees a better deal just around the corner and reads weekly about a better SSD thats just about to be released.  Next week comes and something better is advertised and so on and so on.  The simple fact is that there will always be something better just a few weeks away and I guarantee your purchase will drop in price sometime down the road.  The truth is that tomorrow never really comes if you elect to wait for the next great release.
.
Be confident that we will get you a great SSD.  Understand that we will get you a great price and watch in awe as the visible difference in your system amazes you!!
.
With respect to size, moving to a SSD means finding alternate storage arrangements for most.  Its true that we can save all of our music, pictures and videos on a SSD but why would we?  Inevitably, it may result in a slower SSD and many just cannot afford to give up such valuable SSD property.  Logically, we would want to keep things such as the OS and programs on the SSD in order to maintain that blistering speed that is the bread and butter of the drive and explore external (and internal) options for storage.  Some invest in an external drive, some in USB flash drives and lately, some are even removing their DVD player and replacing it with the original hard drive.  This last option is becoming very popular as it is a relatively simple switch, in most cases, and the bracket can be found just about anywhere for next to nothing.
.

.
Its funny but, not 10 minutes ago most thought moving to a SSD would break their bankbook and here we are preaching that you can get a great performing SSD and a bracket to switch out your DVD for a hard drive for under $100.
.
Manufacturers, on the other hand, can be confusing as heck.  From the release of the first SSD a few years back we have seen some mighty strange tricks.  Samsung seemed to be the first to experience success and then sold unbranded drives to other manufacturers so we really saw competing companies selling the exact same product, given exception to the label and exterior packaging of course.  This has carried on since and even now we can find Intel  manufactured SSDs sold with competing manufacturer name accompanied by Intels logo and at a higher price than the Intel! Figure that out!  It brings a whole new concept to the company logo, Intel Inside!
.
Here is a great example.  Click on the technical specifications tab of this Kingston SSD and see where it takes you.
. 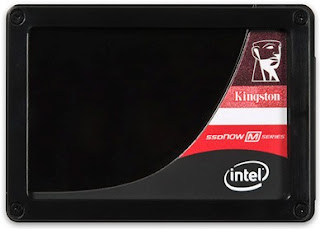 And what brand is best?  There are so many¦Intel, OCZ, Crucial, Samsung, Transcend, AData, Sandisk, OWC, Kingston, Corsair, and now even Western Digital has jumped in.  That appears to be a very smart move and congrats to WD as their reputation in hard drives is bulletproof. I can tell you that Samsung is the true Pioneer of the bunch and has had the fewest problems throughout their progression but Intel has fought long and hard to stand beside them at the top of the hill.  This is the result of great technological advance in the controllers of both Intel and Samsung where other manufacturers sought elsewhere to companies such as JMicron, Samsung,  Indilinx, Marvell and SandForce.  Manufacturers discovered early on that it can be very cost efficient to simply buy SSD controllers from non-OEM sources but, as we will soon find out, such a gamble has also had a devastating effect on consumer confidence and the reputation of SSD builders.

Its kind of funny to think that many SSD manufacturers are not manufacturers at all, but rather assemblers of parts, many of which rely on the parts of their competition.

When are we going to see some reviews of the Comay Venus 3e range? I’ve been thinking of buying one because it’s advertised specs are fantastic 80,000IOPS 555MB/s, but there seem to be no reviews out there to verify this. I know they are new releases, but you would think the first thing a manufacturer would do is get them out for independent evaluation.

Contacted and we will update this should we get a reply and sample sent off.

We received response from Core Rise/Comay this morning and their Venus Pro 3 is on its way for testng! Thanks for the heads up Sam.